There is a Cardboard Lexus You Can Drive 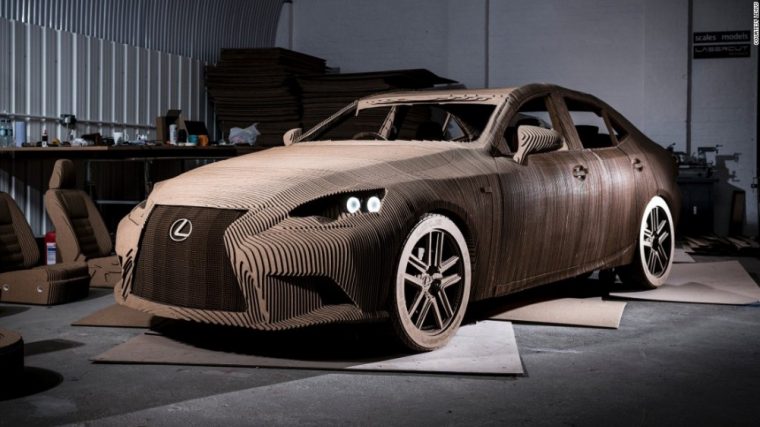 There are many things made out of cardboard besides boxes, such as chairs, tables, faux deer heads, lamp shades, and multitudes of holiday decorations. Now you can add a life-size Lexus IS sedan to that list.

The idea of a cardboard Lexus might not sound too impressive, until we throw in the additional fact that this baby can actually move. That’s right. You can drive the cardboard Lexus IS. An electric motor powers this work of art down the street, though we imagine that it isn’t as fast as the standard Lexus engine normally under the hood.

Want to Drive Your Own Lexus LS? Learn more about the non-cardboard version of the model

The design team at LaserCut Works and Scales & Models took the production design plan of the Lexus IS and reduced it to about 1,700 cross-section slices that are 10mm thick. The pieces were cut and each piece was layered and glued together. The sheets were then glued together over three months. Not one detail was left out. The exterior conveys the same sense of motion as the exterior of the real Lexus, and the wheels turn just like they do on the production model. Inside the functioning doors, there are cardboard representations of the leather seating and dashboard area.

Check out the video below for more on this car’s assembly:

Caring for a Real Car? Check out these service FAQs all drivers should know the answer to

The Cardboard Lexus IS was inspired by origami, and built for the Grand Designs Live Show consumer exhibition in Birmingham, United Kingdom. We hope to see more of it in the future!