‘Thunder Alley’ Review: Everything You Want in a Stock Car Racing Board Game 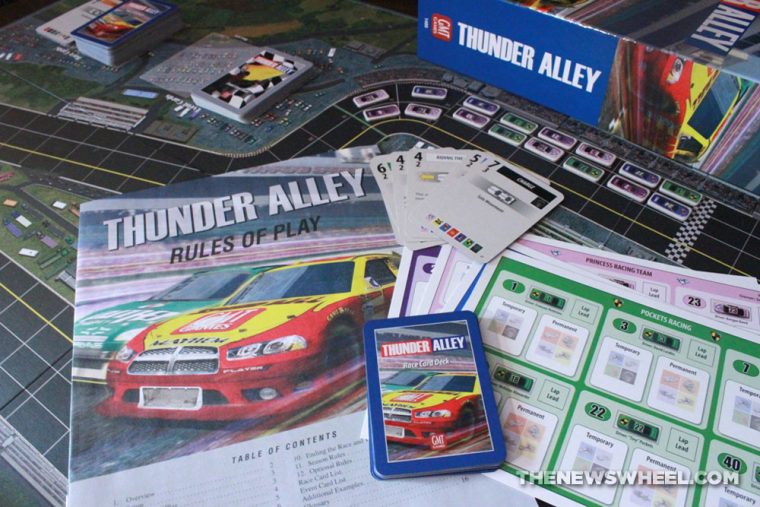 When the automobile was first invented, it wasn’t long before people found a new thrilling, high-speed sport: car racing. Even for those of us who have never driven our cars above 80 mph, we still feel an adrenaline rush watching a NASCAR race on television or a local track competition in person. While many immersive video games have been able to simulate that excitement digitally, can the appeal of real stock car racing be captured in tabletop form?

The board game market is saturated with half-hearted, NASCAR-branded titles that fail to capture the excitement of watching a real stock car race (I mean, who really enjoys answering trivia?). Thankfully, GMT Games has published a title that strives–and manages–to be the definitive NASCAR-like racing game (without the official sponsorship). 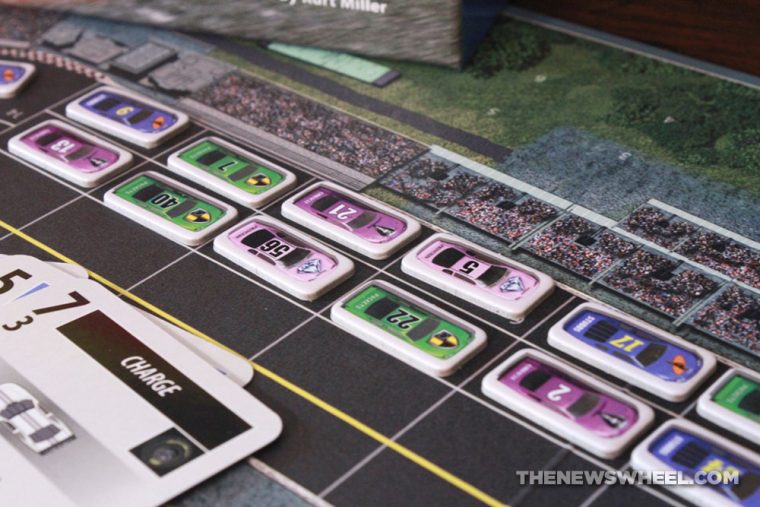 To win Thunder Alley, you don’t necessarily have to have the first car to cross the finish line; rather, because you’re controlling 3-6 cars on the track, you need to earn the most cumulative points based on all of your cars’ finishing ranks.

Each player controls a team of cars of a certain color. Each round, all cars have the opportunity to be activated one at a time and move along the track. Movement is based on cards that are played; different types of movement (solo, drafting, pursuing, leading) often move other cars nearby too, either splitting up a pack of vehicles or bringing them together.

Depending on the moves a car makes, it might receive temporary (able to be fixed by a pit stop) or permanent damage. Its speed (the spaces moved) is hindered by its total damage and, if enough is accumulated, the car can be ejected from the race.

Once all cars have been activated, an event card is drawn that affects all participants (such as debris on the track, a rain storm, or a yellow flag). Lap leaders are awarded bonus points and players are able to move their cars to pit row. Then, hands are refilled and the next round commences. 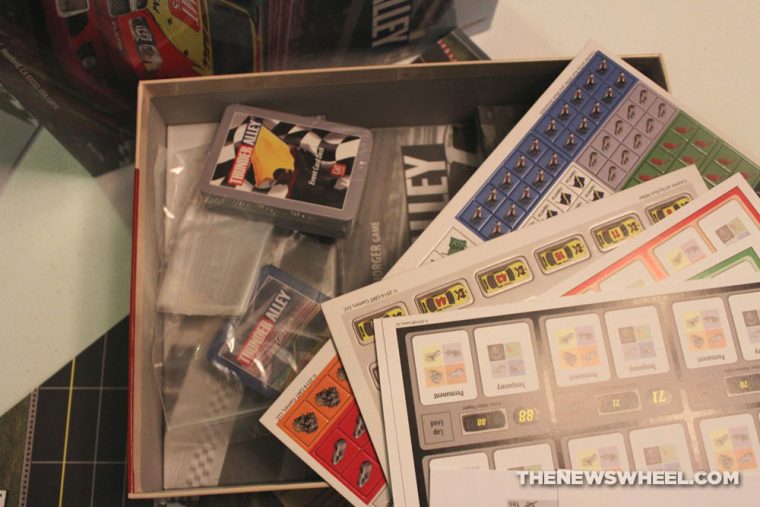 The first thing you’ll notice about Thunder Alley, even before you open the box, is how heavy it is due to the multiple boards within it. The inclusion of two double-sided boards provides four different tracks, all uniquely shaped (as other stock car racing games are typically a simple oval track), which is essentially like including an expansion in the base game. You definitely want to store this box on its side; the heavy boards damage the cardboard inserts over time.

The cover is quite appealing, with blurred stock cars hurtling across the frame and the title in bold print above. It’s kinetic, colorful, detailed, and clearly advertises the type of game you’re going to play. Inside, the box includes a ton of small tokens to punch out, so make sure you have a couple sealable baggies on hand (not included). The boards will need to be flattened each time you play them, as they tend to curve.

Overall, the quality of the components is impressive and live up to the price of the game. 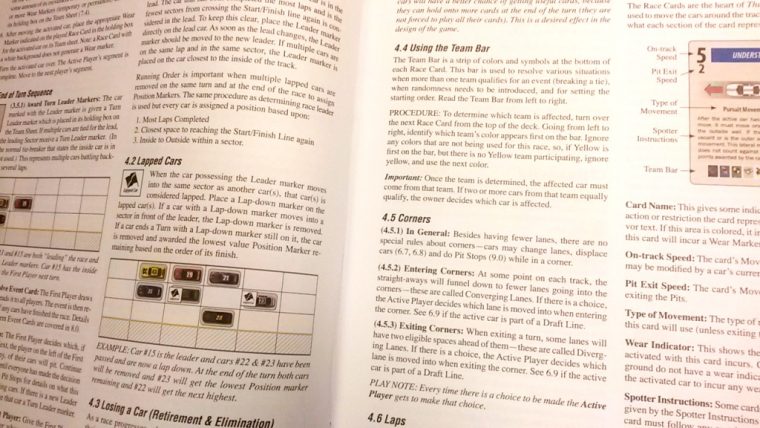 The directions booklet for Thunder Alley is a hefty, detailed 16-page manual with thorough, text-based instructions and diagrams. Divided into 12 sections (with multiple sub-sections, plus card explanations and a glossary), the rules book is daunting to read and requires a thorough study before playing Thunder Alley for the first time. This isn’t a game you want to learn as you play, especially for the complex movement system you’ll spend your time deciphering.

If possible, your first time learning Thunder Alley should be with someone who already knows the game or who’s prepared to answer questions. In fact, you might want to watch video tutorials online before delving into the instructions to give you a better sense of the overall game. It will take you a couple rounds before weaning yourself off the directions book.

There are some typos in the text (for example, mixing up “cars” and “cards), but they don’t get in the way of understanding gameplay, and GMT does include an errata sheet for some typos. It would be nice to include reference cards for each player noting movement types and linking (the same tables printed on the board but for each player to have their own copy).

Blacktop Brutality! This hilariously morbid card game is all about making roadkill… 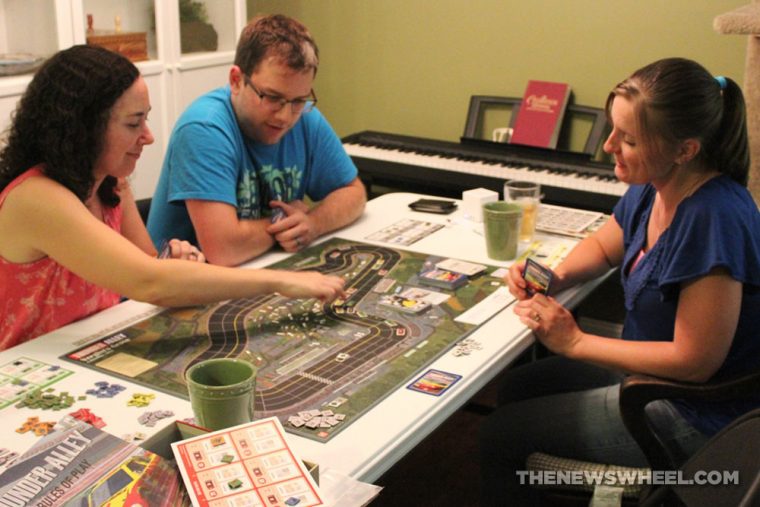 Your first experience playing Thunder Alley will consist of a lot of “Ugh, I should have…” regretted decisions, but the more times you play, the more your performance and enjoyment of the game will improve. That replay value sets Thunder Alley apart from the numerous other surface-level racing games that are easy to learn but fail to challenge players. Many games simplify the track-racing elements into basic experiences all ages can participate in, but Thunder Alley focuses primarily on adults who want more out of their games.

My experience playing Thunder Alley was on the Columbus track (being an Ohio native, I love all the references to Ohio on the tracks and team cards) with four players. That seemed like the ideal number of players, though Thunder Alley can accommodate up to seven. Despite being the first to cross the finish line, I didn’t win the game, and that made me rethink my whole strategy the next time I played. It’s not just about finishing first–you have to watch other players’ cars and move all of yours up equally. 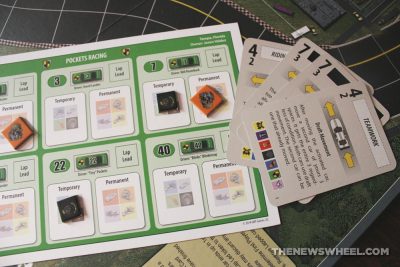 The mechanics of Thunder Alley were appealing enough for the game to be recently re-implemented by the Horgers as a Formula One game in Grand Prix, and elements were also borrowed for their Fast and Furious: Full Throttle last year. And while both of those are appealing in their own ways, neither beat the tight gameplay of Thunder Alley. The fluid interplay between cards and board movement–especially the interaction between all cars on the track–make the multiple complex steps in each turn sequence feel natural and necessary. You’ll be carefully watching the board and feel like you’re always participating, even when it’s not your turn, because of how all cars are affected.

If you’ve been disappointed by all the mediocre NASCAR-branded board games released over the years and are looking for a game that truly captures the white-knuckle tension of stock car racing, Thunder Alley delivers. Of the numerous automotive racing tabletop games I’ve played over the years, Thunder Alley easily feels the most like a NASCAR race. There’s a lot of cars on the track, with movement that affects other cars and damage that accumulates.

Thunder Alley is available for purchase through the publisher’s website, Amazon, Cool Stuff Inc, and other retailers.