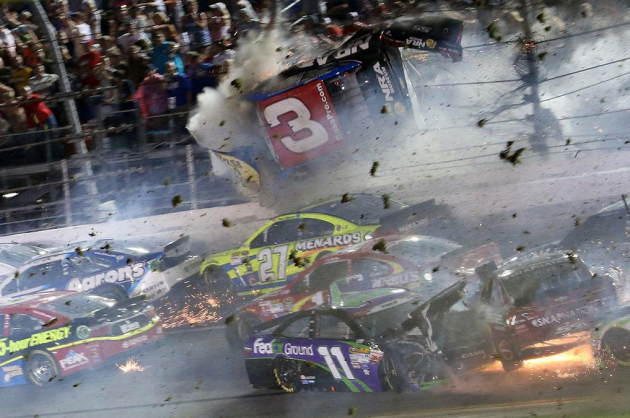 Sometimes fans of NASCAR jokingly say they watch the races just to see the wrecks, but when one of those stock cars actually goes airborne you don’t hear anybody laughing.

That was the case at Daytona International Speedway on July 6th, when Austin Dillon’s No. 3 Chevrolet went airborne and collided with the fence that separates the racecars from the fans who pay to see them compete. Amazingly, Dillon was able to walk away from this accident, but 13 fans required a medical evaluation as result of the carnage. Here is video of the accident:

Debris from Dillon’s car flew into the stands as the fence tore apart his racecar upon impact. In the video, you can see his engine become completely separated from his racecar. Then after returning to the Earth, Dillon’s car was struck again by fellow driver Brad Keselowski .

Here’s real time video of the accident from the fan’s perspective:

Of the 13 fans evaluated, eight refused further medical treatment, four were treated at NASCAR’s infield care center at the racetrack, and one fan was taken to a local hospital.

Dale Earnhardt Jr. won the race, but all the attention was rightfully focused on the terrible crash and some drivers shared very strong feelings when interviewed after the race.

Newman went on to reference how this terrible crash happened at the same track that took the life of Dale Earnhardt Sr. in 2001 and that similar accidents are still occurring.

After walking away from the wreck Dillon said he would be fine and that he just needed to “ice up” before next week’s race in Kentucky. He went on to thank everybody for their concern on Twitter, just a few hours after the life-threatening crash.

Want to thank all the guys that came out to the car to check on me. We compete against each other every week but we are one family #NASCAR