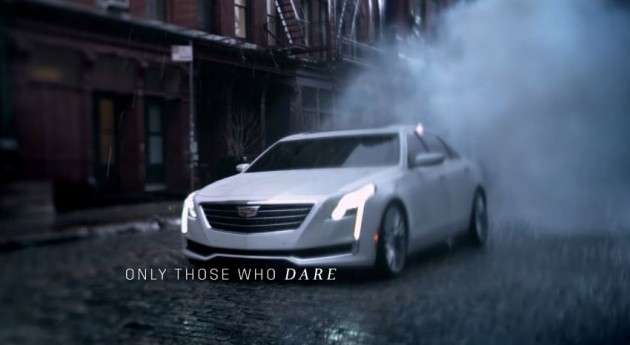 Your first look at the Cadillac CT6

Were you among the millions who sat down to watch the Academy Awards this past Sunday (and hopefully not one of those so unfortunate to sit through WWE’s Fastlane PPV)? If you were the former, then you likely caught a glimpse of Cadillac’s newest television spot, entitled “The Daring: No Regrets.” If you were among those who watched Fastlane, well, you have our sincerest condolences.

In any case, “The Daring: No Regrets” fortunately veers entirely away from whatever direction that whole “white out” thing suggested and stays far away from the pretentious dreck that was the #DareGreatly ad. You’ve got a lot of things and people shot very well and in slow motion, all scored to “Non, je ne regrette rien,” aka That Song From Inception Only Played at Regular Speed. The translation of that title, by the way? “No, I regret nothing.” BECAUSE NO REGRETS.

The ad is filled with star cameos, including Jason Wu (fashion designer), Anne Wojcicki (CEO of 23andMe), Njeri Rionge (Kenyan digital pioneer), Richard Linklater (director of Boyhood), and Steve Wozniak (co-founder of Apple). The biggest cameo, however, comes in around the 42-second mark.

The CT6, Cadillac’s upcoming flagship luxury sedan, is scheduled for a full reveal at the 2015 New York Auto Show and is expected to arrive in showrooms by December.