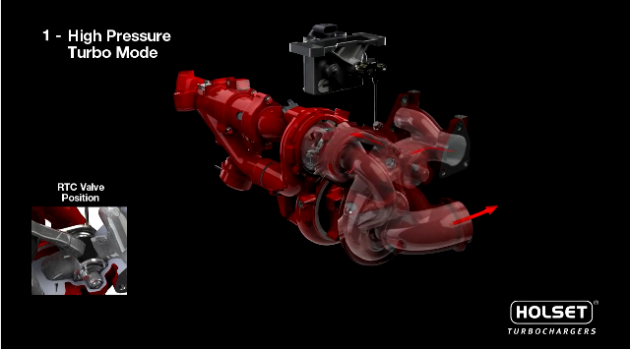 Turbochargers are wonderful things. They work by taking the flow of exhaust out of the engine to spin a turbine, which drives a compressor wheel that forces more fresh air back into the engine. More air in the engine means more power. It’s wonderfully simple, isn’t it?

The only downside to a conventional turbo is something called turbo lag. Since it’s driven by exhaust, you get more boost the faster the engine is running. If you’re at a low engine speed, you have to step on it and wait for the turbo to spool up.

The 2016 Nissan Titan XD, revealed at this year’s North American International Auto Show in Detroit, will be powered by a Cummins 5.0-liter V8 Turbo Diesel engine with its own special two-stage turbocharger. They’ve put a little extra thought into this turbo to provide power at both low and high engine speeds to eliminate that turbo lag. Watch the video below to see how it works in detail:

Diesels love turbochargers because they thrive on compression. They don’t have spark plugs because they compress air and fuel so much that it just detonates by itself. Thanks to this special turbocharger and big diesel V8 engine, the Titan will be able to put down 555 lb-ft of trailer-pulling torque.

We’re excited to see the new Titan in action once it’s done being paraded around all of the auto shows in North America.