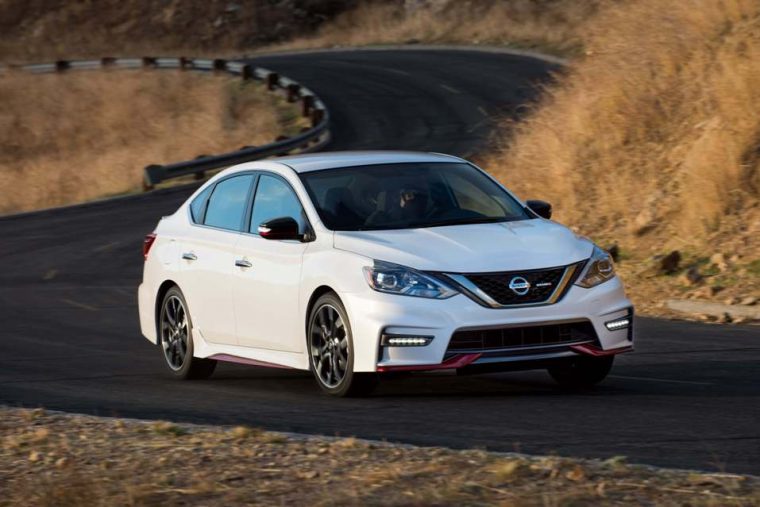 This month, the 2018 Nissan Sentra went on sale at US dealerships. The model received some technology and appearance upgrades, but in general this is the same Nissan Sentra that rolled into showrooms for the 2017 model year.

According to the automaker, the 2018 Sentra is available in six trim levels: S, SV, SR, SL, SR Turbo, and NISMO. All trim levels are available with an Xtronic automatic transmission, but the S, SR Turbo, and NISMO have a standard six-speed manual transmission. The Nissan Sentra S has a very affordable MSRP of $16,990, and the top-tier Nissan Sentra NISMO starts at $25,790. All trims have an additional $885 destination and handling charge.

There are two engine options for the 2018 Nissan Sentra. The engine on the lower trims is a 1.8-liter four-cylinder, and the upper, sportier trims come with a 1.6-liter Direct Injection Gasoline (DIG™) turbocharged engine that gets a boost in horsepower.

Of all the changes for the 2018 Nissan Sentra, the most noticeable has to be Automatic Emergency Braking (AEB) on all vehicles, except those with manual transmissions or a NISMO badge. The S model also got an upgrade with a standard RearView Monitor and 5.0-inch color display with Streaming Audio via Bluetooth® and Siri® Eyes-Free, which now means that the technology is now standard on all trim levels. Some trims also got a bump with standard Dual-Zone Automatic Temperature Control and Intelligent Cruise Control (ICC).

The 2018 Nissan Sentra is a good car if you are looking for an affordable vehicle loaded with technology features. Consider taking one for a test drive at a dealership.