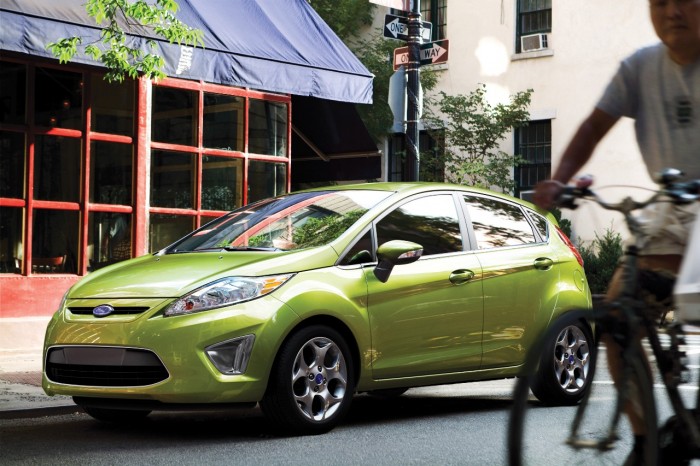 The 2013 Ford Fiesta comes with a restructured options sheet to give buyers an easier time getting exactly what they want or need.

The 2013 Ford Fiesta features strong character lines on both the four-door sedan and five-door hatchback models. Bright paint colors are available and the least-expensive Fiesta successfully manages not to look cheap—in fact, rather the opposite, as some parts even seem upscale. It comes standard with 15-inch wheels but 17-inch aluminum options are available.

Motivating the 2013 Ford Fiesta is a 1.6-liter four-cylinder engine producing up to 120 horsepower and 112 pound-feet of torque at 6,360 RPM and 5,000 RPM, respectively. It comes with either a 5-speed manual or, more interestingly, Ford’s first dual-clutch 6-speed automatic “PowerShift” transmission. This new toy does a better job of maximizing engine power and efficiency than regular automatics and increases your fun at the wheel with faster shift times and more direct engagement.

Efficiency is the 2013 Ford Fiesta’s strong suit thanks to its EPA-rated 29 mpg city/39 mpg highway/33 mpg combined fuel economy. Owners wishing for even more mileage out of a gallon can opt for the Super Fuel Economy (SFE) package, which improves aerodynamics and reduces weight for an impressive 40 mpg highway.

The 2013 Ford Fiesta delivers excellent styling choices and execution on the interior. White and black leather are both available to contrast piping and plum leather seating surfaces. Soft-touch materials are standard throughout, and numerous options are available to make the Fiesta feel decidedly luxurious. The material quality and advanced tech give the subcompact a surprisingly premium vibe given that it’s “only” an economy car, especially with the Titanium trim and Interior Styling package.

Ford is rarely one to shirk on safety and this holds true for the 2013 Ford Fiesta. It received an overall four out of five stars in the National Highway Traffic Safety Administration’s New Car Assessment Program as well as the highest possible score of “Good” in the Insurance Institute for Highway Safety’s frontal, side, and roof crash tests. It comes standard with antilock brakes, traction and stability control, an integrated blind-spot mirror, and a convenient 911 Assist function with the Sync Elements package.

More From Ford: Ford Mustang Takes a Spin in Space