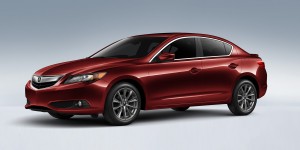 The 2014 ILX backs up the talk as a multiple award winner.

The 2014 Acura ILX is hoping to capitalize on the emerging market of luxury sports sedans, and the aggressively styled and dutifully equipped ILX is off to a good start.  In fact, the 2014 Acura ILX was recently awarded two 2013 Motorist Choice Awards from AutoPacific and IntelliChoice.

The Motorist Choice Awards that the Acura ILX garnered were in the premium market segment in which the ILX finished highest in its class of Youthful and Cosmopolitan vehicles.  In case you aren’t quite sure what that means, AutoPacific and IntelliChoice defined Youthful as a vehicle that “makes you feel young when you own it,” and a Cosmopolitan vehicle is one that “provides prestige or quiet refuge within a city setting.”

“The ILX is positioned as the gateway to the Acura lineup, so winning the Motorists Choice award for the Youthful category is just one more indication we are hitting the Generation Y target,” says Jeff Conrad, Vice President and General Manager of Acura, in a press release.

Clearly, the Acura ILX’s styling played a key role in its winning the Motorist Choice Awards, but so did its impressive list of interior technologies, including keyless Access System with smart entry and push-button start, Pandora® interface, SMS text message function for easy connectivity, and Bluetooth® HandsFreeLink®.

Would the 2014 Acura ILX been your choice in the class of Youthful and Cosmopolitan vehicles? Let us know in the comments below!