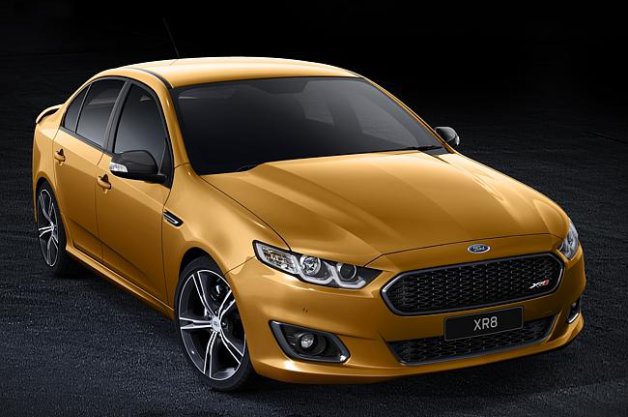 All good things must come to an end, and so it shall go with the Ford Falcon XR8. It’s been well-known that Ford intends to end production in Australia by the end of 2016 and convert it to an import-only market, which coincides with the goals of the One Ford plan and makes the next-gen Mustang the future pony car du jour for Aussies. But none of this means that Ford intends to let the XR8 go out with a whimper, revealing the 2014 Ford Falcon XR8 and dubbing it the “best Falcon ever.”

“The challenge was delivering a powerful, yet premium look for the 2014 car,” said Nima Nourian, Exterior Design Manager for the Falcon. “I’m proud of the fact that the new Falcon XR builds on an already distinctive design and yet delivers a whole new personality. “The Falcon is acknowledged as being one of the most iconic Australian sedans available but the 2014 Falcon pushes this theme further forward. Our customers will easily identify the new Falcon by its premium look.” All considered, the new Falcon XR8 is not entirely revamped at all; rather, it’s more like your standard mid-cycle refresh. It’s basically a four-door Mustang with the face of a Fusion, and there’s honestly not a thing wrong with it. The 2014 Ford Falcon XR8 is guaranteed to get a supercharged V8 (almost certainly the 5.0-liter Coyote), but perhaps the most interesting detail is the promise of models powered by the EcoBoost (just like a certain other pony car we know) and a trio of six-cylinder engines.

“Four, six, or eight; our customers will have more choice,” said Ford Australia President and CEO Bob Graziano. “To enhance the choice too, our six cylinder customers will also be able to choose between the locally developed EcoLPi engine or Turbo six cylinder, as well as the naturally aspirated six. Quite simply, we think this is the best Falcon ever.” If the last Falcon ever is the best Falcon ever, that’s a helluva way to go out. Source: Ford Online Australia