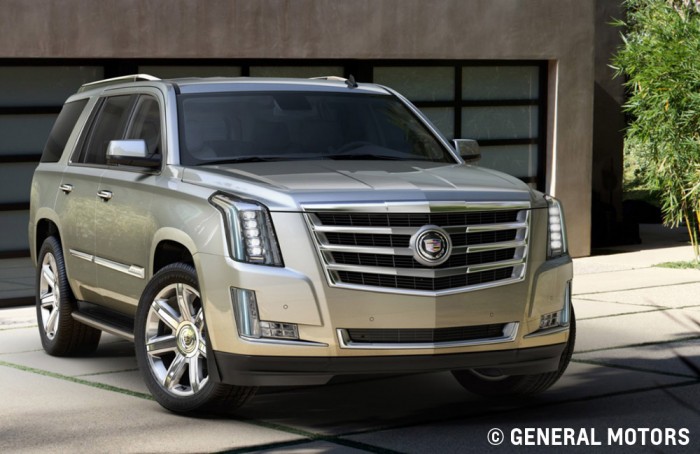 Cadillac vehicles take automotive architecture to a whole new level, and their Art and Science design language is among the most distinctive on the market today. The luxury brand is taking it to another level this year by integrating a variety of design cues from modern urban buildings around the world in the design of the all-new 2015 Cadillac Escalade exterior lighting design. That’s right: Cadillac puts that much detail into making sure that their headlamps look better than anybody else’s.  The typical Cadillac vertical light fixture, which has been a—heh—fixture since 1948, now adds an even higher level of sophistication to the next-generation luxury SUV.

“The 2015 Escalade exterior light signature draws inspiration from a variety of sources, beginning with Cadillac’s heritage of vertical exterior lamps and extending into architecture,” said Exterior Lighting Design Manager Martin Davis in Cadillac’s press release. “Iconic buildings, like the Hearst Tower in New York City, were a big inspiration due to the interplay of glass and metal.”

The headlamps are built to suggest that the lights themselves are floating in space, thanks to metal accents that separate the five parabolic lights. The rear tail lamps utilize LEDs in the shape of “neo-tailfins” that recreate the look of classic ‘60s Caddies.

All told, the 2015 Cadillac Escalade exterior lighting setup utilizes 142 LEDs. There are 17 LEDs in each headlamp, 7 in each lower fascia lamp, 29 in each taillamp, and 36 in the center high-mount stop light.

The only thing that’s about as fancy as the 2015 Cadillac Escalade exterior lighting design is…you know…the rest of the Escalade.