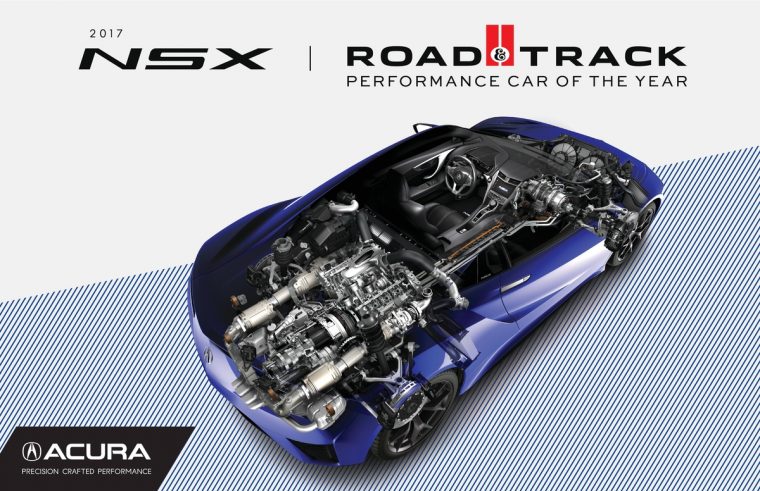 Acura took its sweet time developing the all-new NSX, but all of the waiting appears to have paid off—Road & Track has just named the Acura NSX its 2017 Performance Car of the Year.

“For the first time in a hybrid automobile of any price or capability, technology has been placed firmly in the service of emotional involvement rather than in place of it,” write the editors of Road & Track magazine, in a feature that will appear in the December/January issue that hits newsstands on November 15th.

Car Shopping: Buying or leasing your next vehicle

“Everything about the car—from the way in which the brake-by-wire pedal lengthens its travel when the brakes are hot to the manner in which the mid-mounted V6 permits itself a bit of the ol’ barbaric yawp when it’s winding out in fourth gear—is intended to enhance the driver’s involvement,” the magazine continues.

This is the fifth year that Road & Track has handed out a Performance Car of the Year award. Winners are chosen based on four days of testing, which is divided into two days on the back roads of Kentucky and Tennessee, and two spent at the National Corvette Museum Motorsports Park racetrack in Bowling Green.

“Every aspect of the new NSX—acceleration, braking and cornering—is a precise, new experience,” said Acura executive Jon Ikeda. “Having the NSX recognized by Road & Track’s esteemed group of evaluators is not only a great honor for the car, but a testament to the skill, determination and challenging spirit of our team—we are immensely proud.”