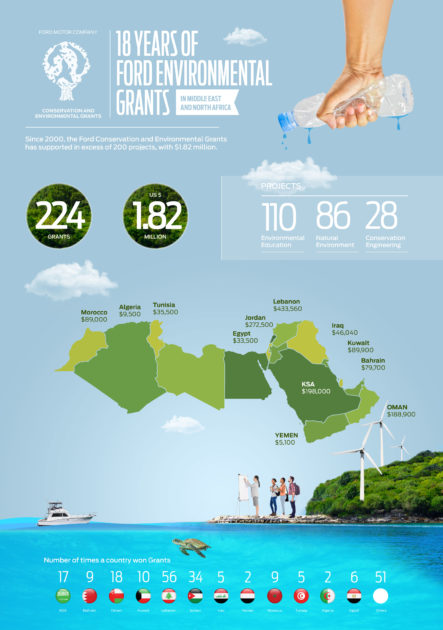 This year’s awards include a new Best in Research crown for the project that best focuses on resolving a specific issue. The winner for 2018 was Our Environment, Everyone’s Responsibility from Jordan, which won $5,000 to help combat plastic pollution.

Coming Soon from Ford: What we might be able to expect from the Bronco’s appearance

In all, there were five $15,000 grant recipients: Waterkeepers Iraq’s Halgurd-Sakran Park Project; the Andre Nahhas School in Lebanon’s Rehabilitation of Al Nakheel Island in El Mina; the creation of a botanical garden at the American University of Iraq, Sulaimani; Protection of the Waterways: Wadi Al Abid led by the Ouaourint Association for Development and Cooperation; and five-time winner Arcenciel, which works to optimize composting.

Since the creation of the Ford Conservation and Environmental Grants 18 years ago, the automaker has doles out more than $1.8 million to 200 projects in the Middle East. Entries can be submitted from Algeria, Bahrain, Egypt, Iraq, Jordan, Kuwait, Lebanon, Morocco, Oman, Saudi Arabia, Tunisia, and Yemen.

“For nearly two decades, Ford Motor Company has been committed to conservation and sustainability in the region, with close to $2 million granted to local environmental projects,” said Mark Ovenden, president, Ford Middle East and Africa.

“Ford is very proud to empower individuals, and local organizations, who are dedicated to preserving the environmental well-being of their community,” Ovenden added. “By providing necessary funding and visibility, Ford hopes to encourage the spread of similar grassroots efforts that will serve as catalysts for change across the globe.”

Off to the Races: Production underway on new Ford Ranger ahead of 2019 return