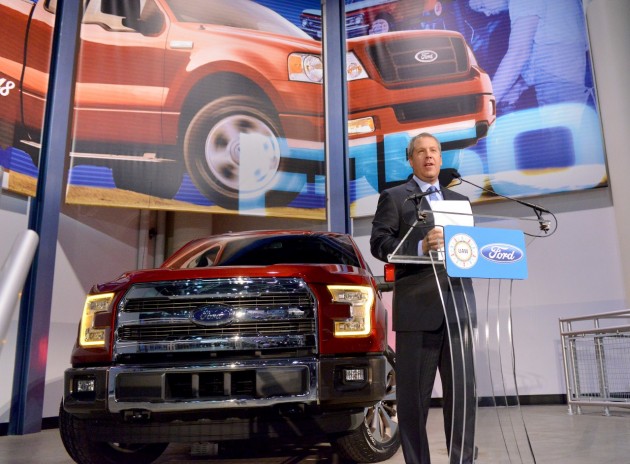 Only weeks after announcing that it had smashed the original goal of creating 12,000 hourly jobs in the United States by 2015, Ford is at it again, adding 850 jobs at Ford Rouge Center in Dearborn in order to support the impending launch of the 2015 F-150. Ford Rouge Center is comprised of the Dearborn Truck, Dearborn Stamping, and Dearborn Diversified.

“As customer anticipation for the all-new F-150 continues to build, today we are bringing on 850 new jobs to help meet the market demand for the toughest, smartest, most capable F-150 ever,” said Joe Hinrichs, Ford president of The Americas. “The new truck sets new standards for the future of tough – right down to how it’s built.”

The 2015 F-150 will also be produced at Kansas City Assembly Plant, where Ford recently added 1,200 new hourly jobs. Since promising to create 12,000 new hourly jobs in 2011, Ford has created 4,000 positions in Kansas City and more than 4,000 in Southeastern Michigan alone, including:

“Ford’s announcement is more positive news for the citizens of Michigan and a further sign of the comeback of Michigan, manufacturing and the auto industry,” said Michigan Gov. Rick Snyder.