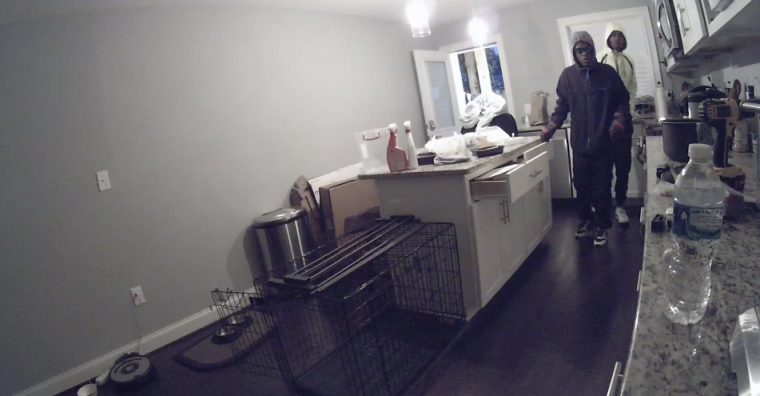 In today’s age, having a car that keeps you connected while you’re out on the road is a top priority for many people. That is, unless you’re stealing said car.

At the end of last year in Baltimore, Maryland, a group of teenagers were out doing the usual “kid” stuff—and by that I mean breaking into a house and stealing things—when they stumbled upon the keys to a Jeep Renegade. Not believing their fortune, these teens decided to take the Jeep for a bit of a joy ride. They kept the car for a few days, abandoning the vehicle when the gas tank ended up on “Empty.”

Get Active: See why the Jeep Grand Cherokee was named the Active Lifestyle Vehicle of the Year

Much to the chagrin of these menaces, the owner of the house they broke into and the Renegade happened to have a Nest camera installed in his house—and he works in the cyber-security field. The owner, who is known as @BaconIsFruit on Twitter where he tweeted about this debacle, was able to watch the teenagers as they rampaged around the house, looking for things to steal. After bringing the video footage to the police, one of the culprits was identified. The only problem? He wouldn’t give up the names of the other teens.

As you might expect, since @BaconIsFruit works in the cyber world, the owner began searching online for clues as to the identity of the other kids. Luckily for him, the teenagers—without thinking—decided that it was a great idea to pair their phones with the Jeep’s Uconnect infotainment system.

Jeep’s Possible Future: Find out if a 2017 Jeep Scrambler is possible

Soon enough, @BaconIsFruit found an Instagram profile username that matched the name of one of the phones—and that profile had a follower whose name matched the other phone.

So not only is the Fiat Chrysler Uconnect system able to play satellite radio and make hands-free calls, but it’s basically a cop, too. No wonder it’s been raking in awards left and right.

The Baltimore City Police now have plenty of leads to go on, which means these kids are sure to see the inside of a police station sometime soon.

You can watch the Nest video for yourself here and here.