On the day prior to the 50 year anniversary of the release of the Ford Mustang, Ford revealed its 50 Year Limited Edition Mustang, which would be limited to 1,964 models. While enthusiasts were no doubt quick to line up for the chance to get at one of these beautiful ponies, they’d ultimately end up having to wait until the needs of the die-hard enthusiasts were satisfied. By die-hard enthusiasts, we of course mean top-ranking Ford executives.

According to Detroit Free Press, the first 50 Year Limited Edition Mustang belongs to none other than Bill Ford, who Ford North American marketing manager Steve Ling says is the biggest Mustang fan in all of the world. Fitting, then, that his should happen to be number 0001 out of 1964.

“This vehicle is personal to people,” said Ling. “Some of the biggest fans are within the company and it is great that the leadership is so interested.”

Among those company men who just so happen to be big fans of the Mustang: new CEO Mark Fields and Ford President of the Americas Joe Hinrichs. Dave Pericak, chief engineer of the Mustang, will be getting number 0008 out of 1964. 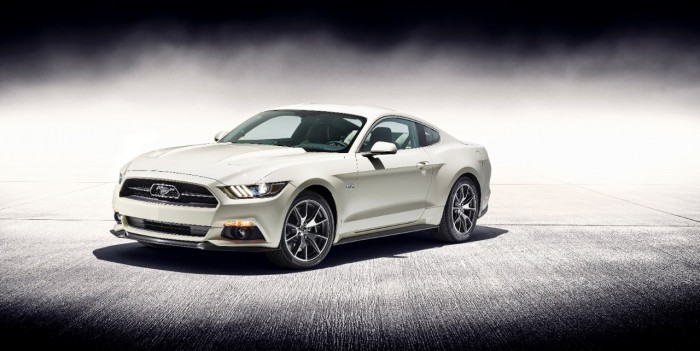 The Mustang 50 Year Limited Edition should be arriving around the same time as the 2015 Mustang coupe, which is scheduled for delivery beginning in early October.

The 50 Year Limited Edition is based upon the GT fastback model equipped with the performance pack, and it is offered only in Wimbledon White or Kona Blue. Exclusive features include chrome bezels around each tail lamp, louvered rear-quarter windows, and “50 Years” badging throughout the vehicle.