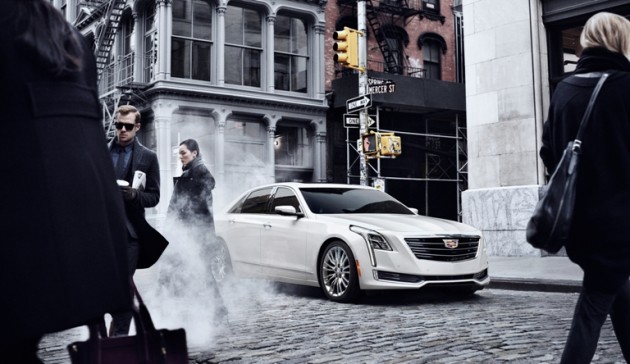 2016 Cadillac CT6 will be offered with a PHEV variant
Photo: © General Motors

Cadillac made the announcement Sunday during the opening day of the Shanghai Auto Show that it will indeed offer a Plug-In Hybrid Electric variant of its upcoming CT6 sedan. Cadillac says that the CT6 PHEV should be capable of more than doubling the economy of its standard powertrain offerings—which include a 3.0-liter Twin Turbo V6 and a 3.6-liter V6.

“The first-ever CT6 is a technological showcase throughout, making it an ideal platform for Cadillac to offer its first plug-in hybrid,” said Cadillac President Johan de Nysschen. “In the CT6, Cadillac presents a new formula for prestige luxury. The advanced Plug-In Hybrid system is a key addition, providing a combination of exceptional fuel economy, crisp acceleration and strong electric-driving range.”

It was revealed that the CT6 PHEV will utilize an 18.4 kWh lithium-ion battery pack, which will be located between the rear seat and the trunk. It can be charged using either a 120V or 240V charging unit, and range estimates are expected to be announced closer to US launch.

The CT6 will use a two-motor, rear-wheel electric variable transmission (EVT) that will use three planetary gears and be mated to a 2.0-liter turbo-four, a combination that is expected to provide output of around 335 horsepower and 432 lb-ft of torque.

Also appearing in the CT6 PHEV is iBooster and Electronic Stability Program technology, which will provide regenerative blended breaking for max fuel economy and improved stopping distance, as well as Regen on Demand.

Expect more details in the months to come.