Cadillac’s future is looking bright.  General Motors’ luxury brand has been selling like wildfire over the course of 2013, posting considerable gains in the month of July to help bolster its distinction as the world’s fastest growing full-line luxury brand.  That brightness was clearly on display beneath the sun hanging over the Pebble Beach Concours d’Elegance, where Cadillac revealed its 2014 Elmiraj Concept Coupe.

A 205-inch long two-door two-plus-two coupe, the Elmiraj is a sly combination of the size and power of the classic ‘60s Caddy coupes and the modern-day finesse and style of current-year Cadillacs such as the ATS and CTS, as well as the Ciel Concept that also debuted at Pebble Beach in 2011.

Lead Elmiraj Interior Designer Gael Buzyn says that the concept coupe is “a very obvious tribute to the big Cadillac coupes of the 60s” that manages to be beautiful and powerful in the same breath.  Buzyn isn’t kidding about the Elmiraj’s power, either: beneath its hood is a turbocharged 4.5L V8 engine that puts out about 500 horsepower and as many pounds-feet of torque.  The engine is inspired by Cadillac’s Vsport line, which touts track-quality performance with street-worth capability.

The Elmiraj is built over a rear-wheel drive chassis that Cadillac has indicated as being part of an ongoing vehicle development project that is slated for future production.  We can only hope that this means that elements of the Elmiraj will find their way into future Cadillac vehicles, because the Miraj is a vision worth beholding. 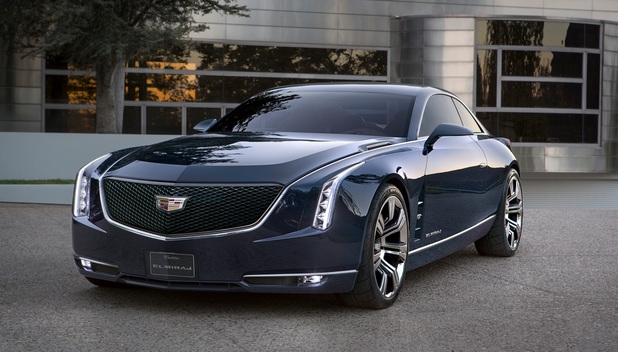