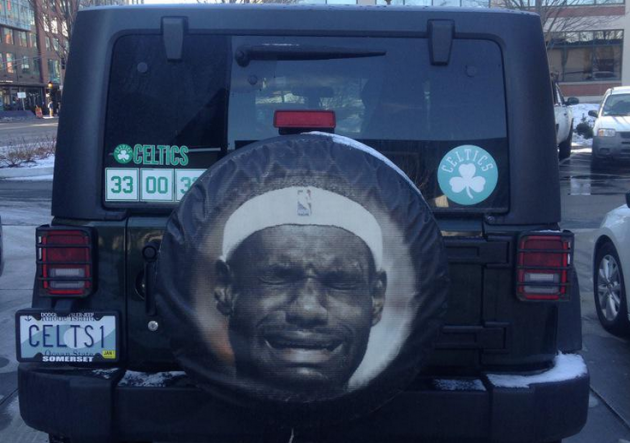 Just in time for St. Patrick’s Day, we’ve been blessed with a viral photo that seems to encapsulate all things Irish: Celtics, shamrocks, Boston, and the aggressive holding of grudges.

This Celtics fan’s Jeep Wrangler features the basketball-themed window decals and vanity plate one might expect to see in Beantown, but also ups the ante with a tire cover that shows NBA All-Star LeBron James crying (presumably after reading the latest K900 sales figures).

LeBron was a key figure in the heated Miami Heat-Boston Celtics rivalry, which first began to wane after Celtics stars Paul Pierce, Kevin Garnett, and Jason Terry were traded to the Brooklyn Nets. At the time, James predicted there would be no intense Brooklyn-Miami rivalry as a result of the trade, because Brooklyn fans don’t “hate” as well as Bostonians (or “Massholes,” as they’re known in the sports world).

It seems LeBron may have been right about Boston’s trademark hatred, considering he has since taken his talents from Miami to Cleveland, yet this Jeep owner is still driving around New England with a picture of King James weeping.

Piece of advice: while this particular Wrangler may be able to handle rocky terrain, it should probably avoid the streets of Cleveland.