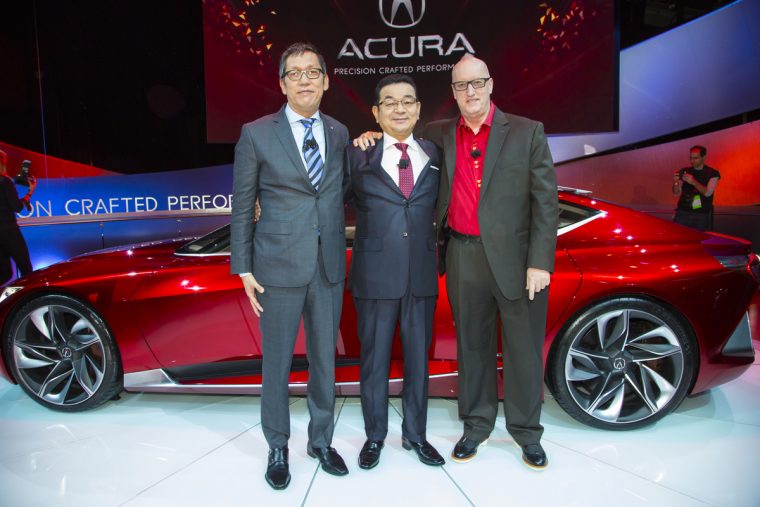 Takahiro Hachigo (middle) has a 35-year history with Honda

The prestigious Honda Motor Company has seen quite a few leaders come and go in the past 30 years. With Takahiro Hachigo as the eighth president of the company, many are hoping he can be decisive and creative enough to efficiently get the company headed in a more positive direction.

Takahiro Hachigo was born on May 19, 1959 and began his career with Honda in 1982 at the young age of 23. Since then, he worked his way up the ranks to get where he is today.

Hachigo started off as a chassis design engineer in the R&D operations of Honda R&D Co., Ltd. and he helped lead the development of the 1999 Honda Odyssey minivan. After the success of Honda’s first minivan, Hachigo then took the lead in the development of the second generation 2001 Honda CR-V, which resulted in doubled annual sales of the vehicle in the US market.

The promise and prowess of Hachigo was duly noted, as he was promoted to senior vice president of Honda R&D Americas, Inc. in April 2004. From then until March 2006, Hachigo worked on the development of many Honda and Acura vehicles. After his short stint in the US, he returned to Japan as an operating officer of Honda R&D Co., Ltd. and was promoted to managing officer in April 2007.

Things were only looking up for Hachigo after he returned to Japan. In April 2010, Hachigo moved to Purchasing Operations and became the general manager of Automobile Purchasing Division 2. He moved yet again, in April 2011, to Honda’s Suzuka Factory as the general manager. Hachigo was constantly looking for ways to help Honda succeed and eventually moved to the UK in April 2012, where he served as the vice president and director of Honda Motor Europe Ltd. as well as President of Honda R&D Europe until March 2013.

Hachigo then moved to China in April 2013 to become the vice president of Honda Motor (China) Investment Co., Ltd. In April 2015, Hachigo returned to Japan as a senior managing officer of Honda Motor Co. and eventually assumed the position of president, CEO, and representative director in June 2015, succeeding Takanobu Ito, who had served as CEO from 2009 to 2015.

According to Honda, Hachigo’s hobbies include building model trains and collecting miniature cars. He previously owned a Honda Odyssey but stated that he had interest in the new Honda Civic Type R back in July 2015.