Well, it looks like Cadillac’s “white out” advertising campaign has come to an end, and, boy, what an exciting reveal we got!

Wait. So what exactly does this have to do with a white out? Also, where the hell are Cadillac’s products? Isn’t showing the product at least a significant point of advertising if not the entire point? You see a whole bunch of vehicles throughout the streets of New York in the above clip, but there is never an actual Cadillac featured anywhere. Rather, you get a whole commercial presumably shot from the perspective of someone riding in a Cadillac. So that’s…something? We guess.

Here’s the most perplexing part—the narration is the vast majority of President Theodore Roosevelt’s 1910 speech, “Citizenship in a Republic”:

It is not the critic who counts; not the man who points out how the strong man stumbles, or where the doer of deeds could have done them better. The credit belongs to the man who is actually in the arena, whose face is marred by dust and sweat and blood; who strives valiantly; who errs, who comes short again and again, because there is no effort without error and shortcoming; but who does actually strive to do the deeds; who knows great enthusiasms, the great devotions; who spends himself in a worthy cause; who at the best knows in the end the triumph of high achievement, and who at the worst, if he fails, at least fails while daring greatly.

Naturally, Cadillac took one of the most defining moments in the incredibly well-defined career of one of the country’s most respected and beloved presidents…and turned it into a hashtag.

Oh, we get it, don’t get us wrong. Battling back against adversity, proving everyone wrong, you can’t judge a carmaker unless you actually make cars yourself, etc. It fits with the idea of Cadillac not quite living up to its reputation and making mistakes on the way to (hopefully) becoming the biggest luxury brand in the world.

But this is the look you want for your new campaign? Seriously?

Here’s an idea: next time, just make the crux of your campaign #hatersgonnahate and leave Teddy Roosevelt completely out of it. It’ll look a lot less silly.

Hopefully, this will all culminate/terminate on the 22nd when…whatever this is supposed to be…is revealed in its full glory during the Oscars. Hopefully, it’ll veer completely away from using this speech, too.

About two and a half years after Roosevelt spoke about “Citizenship in a Republic”, he was shot directly in the chest by a saloonkeeper while giving another speech. Rather than stop speaking and going to the hospital, he kept talking for 90 minutes. Not only that, he piloted the company through troubling times, busted trusts, ended a major war, won a Nobel Peace Prize, and got his face carved into Mount Rushmore.

Cadillac, on the other hand, makes cars. Fancy cars. 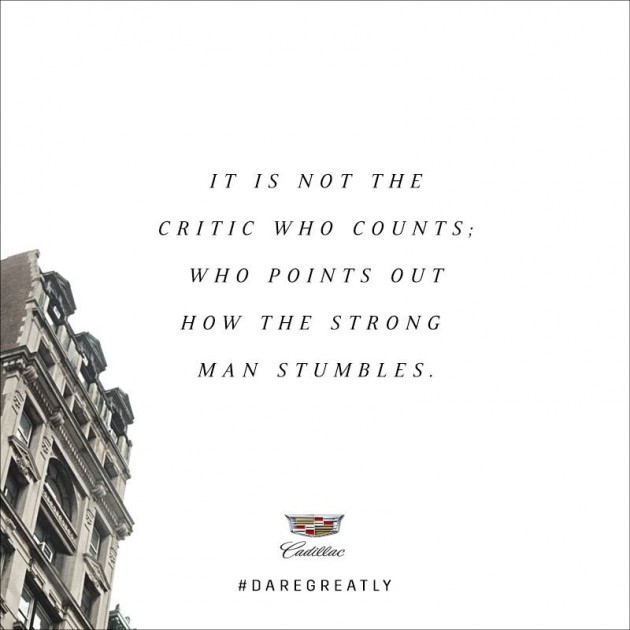 Here’s a paraphrased Teddy-ism that Cadillac could stand to follow: “Speak softly and make better ads.”