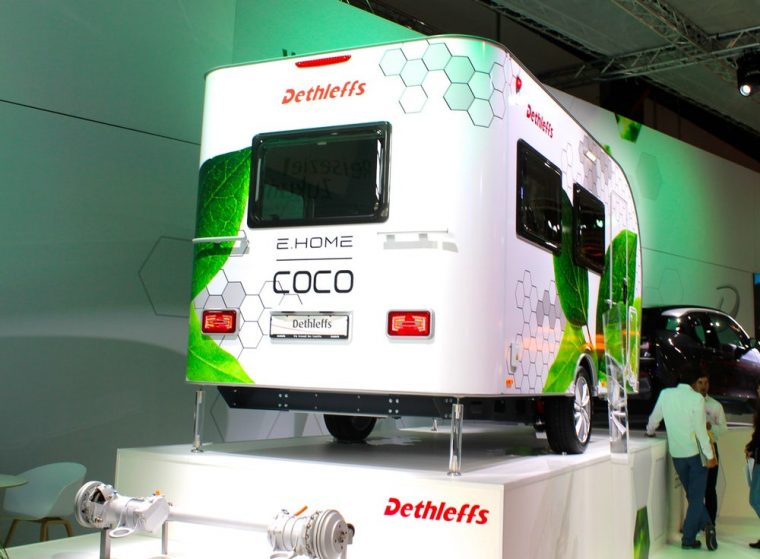 Often, electric vehicles have great efficiency, but not particularly strong motors. This generally makes sense as they are getting going, as engineering problems force carmakers to make a trade-off between range and strength. That is a bummer, though, if you like electric cars and trailer camping at the same time. One German RV maker is meeting electric cars halfway, though, with its e.Home Coco trailer concept.

Other Option: Alternatively, you can use the Mitsubishi Outlander PHEV

The idea that the RV maker, Dethleffs, had was to have the trailer give the car a hand with its own propulsion. So, it has its own 80-kWh lithium-ion battery pack, a torsion-beam axle with two electric motors (one for each wheel), and a special control system of a central unit and strain relief module. Each motor gives its wheel 54 horsepower.

That control system performs two functions. First it connects to the car and tells the trailer when to accelerate or brake. Then it balances the trailer on its axle, similarly to how a Segway works, so that it doesn’t put too much weight on the coupling.

Smart Choice: Here you can learn more about the Outlander PHEV

Upon arrival at the campground, the battery pack offers power for operating the various systems inside, even running an air conditioning unit. Also, the owner can guide the trailer easily into a specific place when disconnected from the car. When parked, the trailer has solar panels on top to recharge. Finally, sitting at the owner’s house, the trailer can serve a different purpose, both as energy storage and by providing electricity to the home from the solar panels.

It really makes you wish it weren’t just a concept.