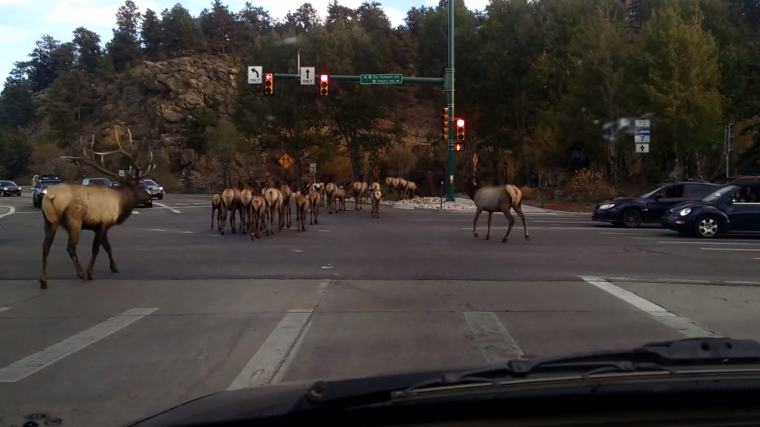 For many Americans, the only time wildlife affects our daily commute is when a mother duck decides to walk her babies across a busy intersection, which can be annoying, but certainly not dangerous.

If you happen to live in The Centennial State though, then sometimes you may have to deal with larger animals blocking the roadways, which recently was the case in Estes Park, Colorado.

Colorado dweller Autumn Phillips, along with others, were forced to sit idle in their vehicles, while a rather large group of Elk decided they were going to loiter in a busy intersection. Thinking quickly, Phillips seized the opportunity and took video of the incredible scene, which she uploaded to her personal Facebook page.

The video was shared by 9 NEWS in Colorado and has been viewed more than 2.8 million times, as of October 1st.

At one point in the video, a rather large elk passes uncomfortably close to Phillips, which caused her to produce a rather frightening scream, but it didn’t appear that anyone–or any vehicles–were injured or damaged as the Elk did their thing.

The headquarters for Rocky Mountain National Park is located in Estes Park and Fall time is known to be mating season for Elk.

Thankfully, social media and smartphones have allowed a greater number of people to view incredible scenes like this one.