I was sitting at my desk finishing up a history page for the Ford Fusion when my boss nonchalantly asked me if I felt like road tripping it to Detroit this week for NAIAS. If it hadn’t been over instant messenger, I might have tackled her with a bear hug. (Did she seriously think “No” was an acceptable answer?) I made quick arrangements for the pooch with a doggysitter, packed my bags, and hit the road with my photographer, Marci, on Wednesday morning.

The drive in was riddled with bathroom breaks because Marci apparently has a Chevy Spark as far as bladders go. Not only that, we hit a bit of snow, but nothing Marci’s 2010 Civic Hybrid couldn’t handle. Plus, she’s (nearly) mastered the art of driving with her knees… 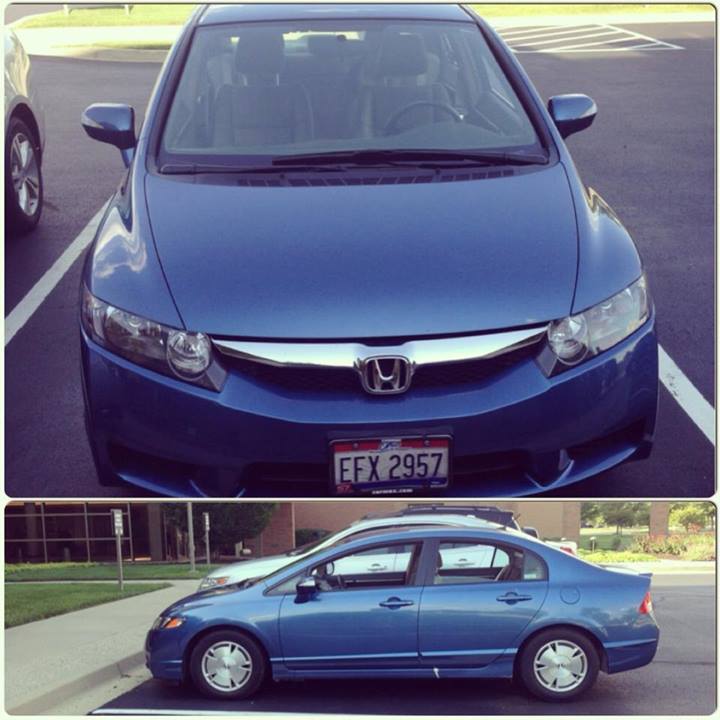 We arrived in Detroit shortly after Industry Day began at noon and stopped at our hotel, just down the road from Cobo Center (which incidentally rhymes with “hobo,” much to our misinformed minds’ dismay). After handing off our bags to the concierge and throwing our keys at the valet, we hopped in a shuttle and were off—because we were too lazy to walk, naturally. Hey, sitting in a car for four hours is hard work. 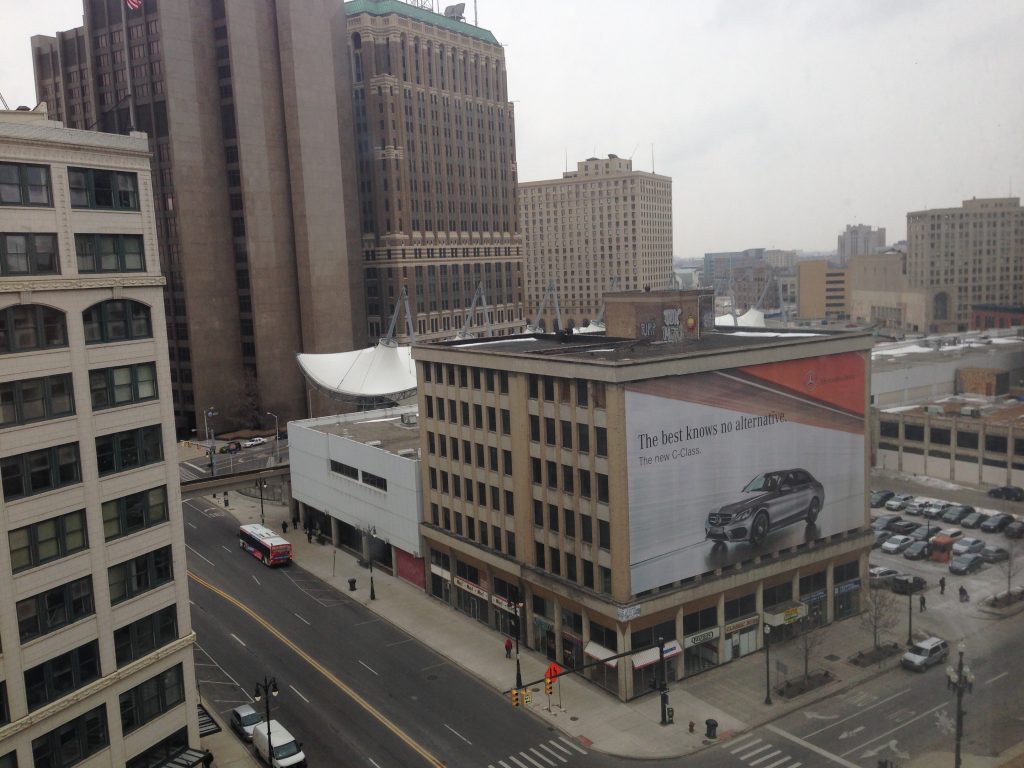 The view from our hotel: check out that C-Class action.

Luckily, we preordered our tickets, so after waiting in a relatively short line to pick them up, and after one more bathroom break for Marci, it was time to go in.

Strap in, folks, it’s going to be a bumpy ride. 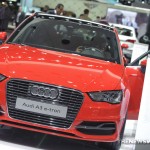 When we first stepped inside NAIAS, I felt like I was getting off the subway for the first time in Manhattan. I’m sure Lewis and Clark felt similarly on their trip to the Pacific, although I am not quite certain how they made it… (Read more) 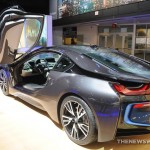 The BMW display was the first place that Marci and I spotted one of the “car janitors.” These people were dedicated to keeping the cars clean and shiny all day. There were honestly so many of them that for a while it seemed like… (Read more) 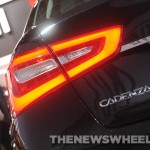 The first part of Kia’s display visible to us was the luxury section. Kia is attempting to enter the luxury market within the next few years, and much to cynical Tim’s surprise, the luxury rebranding is actually going… (Read more) 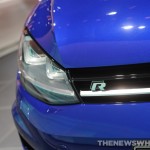 After having spent too much time in Kialand with the babbling photographer, Marci and I felt rushed. Plus it was nearly three o’clock and our stomachs were grumbling for overpriced Cobo food, so we didn’t spend as much time looking… (Read more) 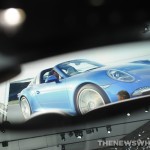 Ready to eat the next unsuspecting floor model we saw, Marci and I agreed that Porsche should probably be our last stop before lunch because, and don’t quote me on this, I don’t think resorting to cannibalism on your first business… (Read more) 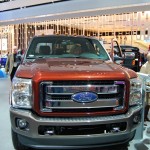 Ford’s display at NAIAS was most definitely the largest, and noticeably so. Just the sight of it was overwhelming, especially after we’d already spent four hours on our feet with heavy equipment on our backs in the unreasonably… (Read more) 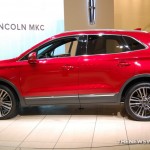 For those of you who are unfamiliar with Lincoln these days (and I don’t blame you if you are), the luxury automaker is attempting to rebrand itself, using art and creativity to breathe life into the seemingly ancient… (Read more) 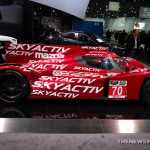 Marci and I could see the General Motors display up ahead and were incredibly eager to finally see the Corvette Stingray in the flesh, so we felt rushed going through the next few booths. A highlight of the Mazda NAIAS display was… (Read more) 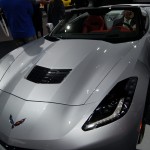 Although we were most excited to get to see the Car and Truck of the Year (Corvette Stingray and Silverado, respectively) at the Chevy NAIAS display, we first made our way through Buick’s and GMC’s offerings. Buick’s five… (Read more) 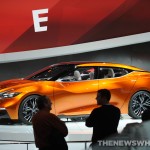 Porsche wasn’t the only booth with a strange smell this year in Detroit. The Nissan NAIAS display was ripe with the brand’s signature Scent of the Future, and it, uh, didn’t smell too good. Now, to be fair, the scent… (Read more) 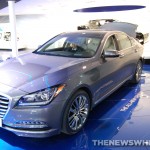 After Marci popped a few pills to alleviate the headache from Nissan’s Scent of the Future, we stepped over to the Hyundai NAIAS display. By now, our feet weighed us down like throbbing cinderblocks, but we had… (Read more) 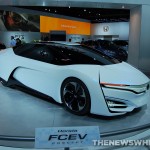 Honda’s display was, in a word, freaking spectacular. Okay, so that’s two words, but I stand by my statement. Immediately upon entering the Honda NAIAS realm, we were greeted by the FCEV Concept, which was unveiled… (Read more) 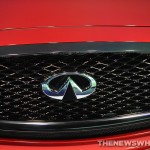 Infiniti’s cars have never particularly wowed me, and the recent change of names (to Q-something or another) did not elevate the brand’s luxury in my mind but just made for one editing nightmare. That said, I really liked Infiniti’s… (Read more) 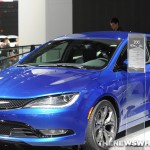 I absolutely loved Chrysler’s section. All four core vehicle brands were well represented, and even Fiat didn’t look too bad. We first stopped at the Chrysler display, where they were showing off the all-new Chrysler… (Read more) 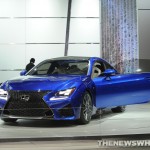 Marci and I were teasing ourselves when it came to the world’s automaker. The Toyota display was in plain sight, but its luxury arm, Lexus, and its youthful brand, Scion, were directly… (Read more) 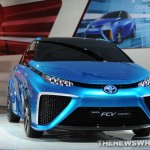 The day was nearly over when we finally arrived at the Toyota NAIAS display. We had been so close to it before, back when we were exploring Porsche, but the tempting fudge made us too hungry, so we left for food and reentered on the other… (Read more) 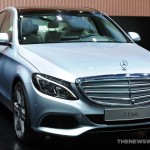 It was nearly 8 o’clock, and Marci and I had been on our feet for eight hours after driving for four. We were tired, we were hungry, and Marci had to pee yet again. Still, we pressed on, quickly snapping a couple… (Read more) 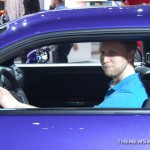 NAIAS Luxury Car Seats: My Definitive Ranking of Places You Put Your Butt

While checking out all the action at NAIAS, it occurred to me that on an editor’s salary, I’d probably never afford a Benz or Bentley of my own. In fact, this trip was full of a lot if firsts for me, as I had never sat in a majority… (Read more)