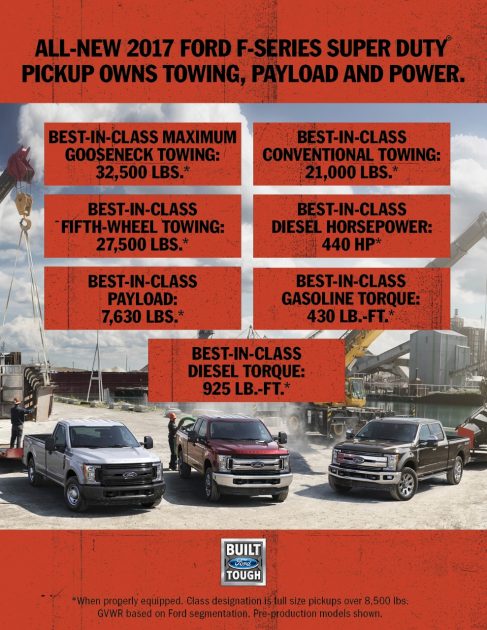 Ford on Monday dropped some details about the upcoming 2017 F-Series Super Duty, revealing that the all-new heavy-duty will offer the best towing and hauling abilities and most horsepower and torque in its segment all in addition to an up to 350-pound weight loss.

“This is the best heavy-duty truck we’ve ever made,” says Doug Scott, Ford truck marketing manager. “We listened to our customers and created the toughest, smartest, and most capable Super Duty ever.”

All of this in addition to the numerous advancements made with the 2017 Super Duty, including the addition of adaptive cruise control and collision warning with brake support for trailers, Blind Spot Information System, in-cab trailer tire pressure monitoring system, a high-mounted stop lamp camera, the Ultimate Trailer Tow Camera System, factory-available trailer camera, and Trailer Reverse Guidance.

The 2017 F-Series Super Duty is scheduled to arrive this fall.

More on This Model: Five customers get an exclusive sneak peek at 2017 Super Duty