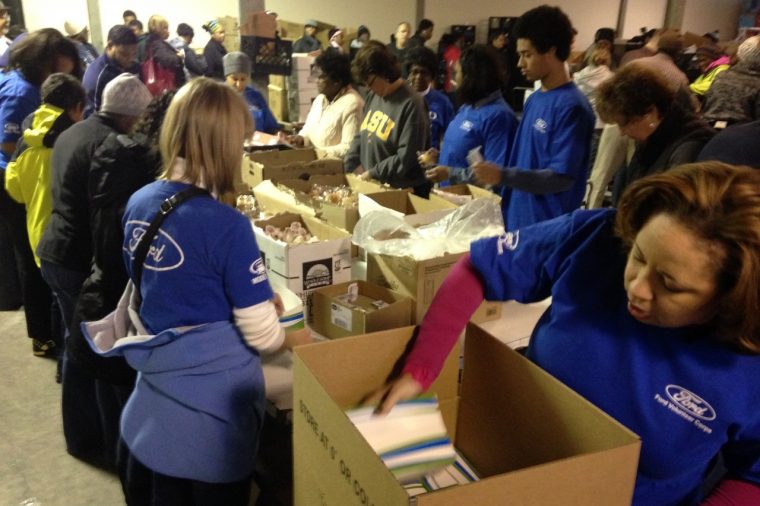 This week, Ford Motor Company Fund will team up with the Detroit Area Agency on Aging (DAAA) for the 10th year in a row to provide a hot Thanksgiving Day meal to homebound seniors throughout the Detroit area. More than 6,000 seniors will benefit from the DAAA and Ford Fund’s Holiday Meals on Wheels program.

“At Ford, we want to help make sure that no one goes hungry especially during the holiday season”, said Pamela Alexander, director, Community Development, Ford Motor Company Fund. “We are proud of our decade long sponsorship of Meals on Wheels.”

Ford employees, family, and members of the community will convene on Wednesday to assemble freshly-prepared meals for distribution on Thursday. Ford’s partnership with DAAA also entails a $50,000 donation that will be used to help cover the costs of its Thanksgiving program as well as meal services it provides throughout the rest of the year.

This year will also mark the first time that DAAA and Ford will hold a telethon to raise money for its shared fight against hunger. The telethon will air on WADL-TV Channel 38 on December 3rd starting at 7 pm.

“As we celebrate with friends, family, and a hot meal this holiday season, in our community, there are many isolated and hungry homebound seniors and disabled adults. This is why we are sharing the love and feeding one of our most vulnerable populations on Thanksgiving,” said Paul Bridgewater, DAAA president and CEO. “We are very thankful for the Ford Motor Company Fund. With their generous donation, we are feeding 6,000 seniors. For us and the seniors we serve, we could not do it without Ford Motor Company Fund volunteers and financial support.”

Ford and Ford Fund have invested more than $166 million in southeast Michigan over the past decade in support of bettering local communities and improving the lives of citizens.