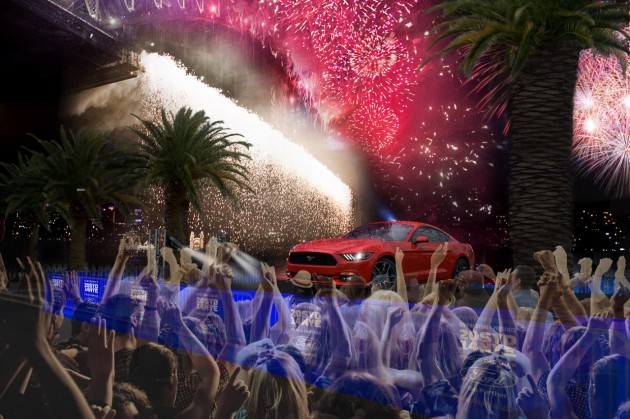 Ford is very serious about making the Mustang the new namebadge du jour in the land down under; so serious that it opted to terminate production of the much-beloved Falcon in a Highlander-esque head-lopping.

The next step in Ford’s quest to increase the visibility of the Mustang in Australia is to feature the prized pony as the featured vehicle in the Sydney New Year’s Eve celebration. Ford will serve as an associate partner for the event, ensuring that the 2015 Mustang will have lots of hero shots among the fireworks. At least that’s what that weird render thing at the top of the page here seems to suggest.

“We are sending a message that Ford has an exciting future in Australia with a great line-up of new vehicles, including the re-introduction of Mustang, which is going global after 50 years as America’s greatest motoring icon,” said Bob Graziano, Ford of Australia President and CEO.

“We could not take the all-new Mustang any higher, so now we will give the world a view never seen from a car of Sydney’s spectacular New Year’s Eve fireworks.”

Ford says that the theme for the 2014 Sydney New Year’s Eve is Inspire. The automaker is also hoping to inspire fan participation by giving Aussies the chance to win tickets to the event by sharing their resolutions at the Ford Australia Facebook page by uploading a picture and using the hashtags #FordNYE and #SydNYE. Three winners will win airfare, accommodations, and tickets for three friends.

Ford will launch a full slate of new products in Australia next year in addition to the Mustang, including the Mondeo, Kuga, Focus, and Ranger.