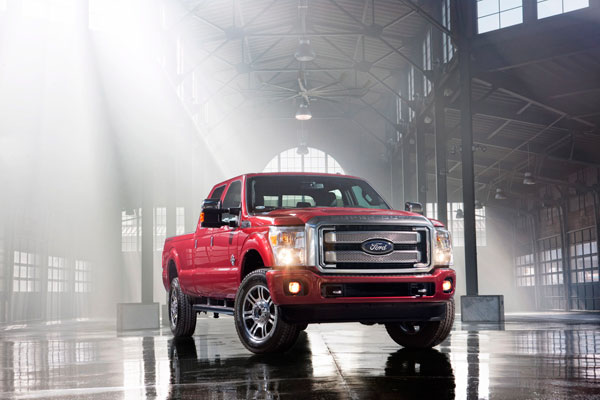 Ford’s SYNC-equipped vehicles, like this Ford Super Duty truck, will soon benefit from a partnership between Ford and Parkopedia to help drivers find parking spots.

It’s shaping up to be a busy week for Ford at the International CES, and a particularly busy week for their SYNC AppLink in-car connectivity system. In addition to the announcement that the 2015 Mustang will house the new-and-improved next-generation of SYNC Applink, Ford has announced that they are teaming with Parkopedia—the premier parking information provider with over 28 million parking spots listed in their app—to create a SYNC AppLink-compatible app. The Ford and Parkopedia team-up will allow Ford vehicle drivers to locate the nearest parking spots and get pricing information through little more than voice commands.

The intention of the Ford and Parkopedia partnership is to improve driver awareness and safety, enabling them to get the information they need about where they can part without having to look away from the road to touch their mobile phones.  All of this, while also saving drivers a few bucks in the process by making them aware of the cheapest and most readily-available lots in their vicinities.

“Parkopedia provides real-time space availability information for drivers, allowing drivers to go directly to the open spot as opposed to circling the block searching for an opening,” said Eugene Tsyrklevich, CEO of Parkopedia, in Ford’s official press release. “At Parkopedia, we understand the value of the connected car.

“Working with Ford will help us reach millions of consumers who want to use technology to arrive at their destinations efficiently and on time, while hopefully avoiding a few parking tickets along the way,” Tsyrklevich added.

Drivers of SYNC AppLink-ready vehicles will need to download the Parkopedia app on their iOS or Android smartphone.  Thanks to Ford and Parkopedia working together, the driver will then be able to press the SYNC voice button on the steering wheel, say “Mobile applications,” and then “Parkopedia” in order to get started in their hunt for parking spots. (As we discovered yesterday, the next-gen SYNC AppLink will circumvent the need for the “Mobile Applications” command, streamlining the process.)

SYNC AppLink is available on over 1.5 million Ford vehicles including Mustang, Explorer, Fusion, Focus, and Super Duty. Ford also announced that SYNC AppLink-capable vehicles will be able to access mood-based music with the HABU Music app.

“Parkopedia is another example of how Ford is going further to heighten the driver experience so our customers feel their vehicle is working with them to get where they are going,” said Julius Marchwicki, global product manager for Ford SYNC AppLink. “Parkopedia has a similar goal to Ford – to deliver a more convenient and efficient driving experience through the use of technology.”

For more information from this week’s International Consumer Electronics Show, check in with us frequently here at The News Wheel!

Brought to you by Palmetto Ford in Charleston, SC