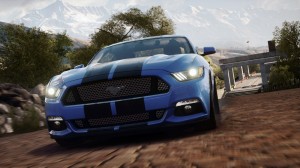 It will be months (at least) before any of us get the chance to drive the all-new 2015 Ford Mustang, but video game players can get behind the wheel today – virtually, of course.  The completely redesigned Mustang marks the next generation for the iconic pony car, and Ford is teaming up with EA to allow players of the popular “Need For Speed Rivals” video game to drive the 2015 Mustang.

Players are able to take advantage of a free download to have the 2015 Ford Mustang as an instant racing option.  If you want a preview of  what the in-game 2015 Mustang looks like and drives like, check out the video below.

“During the past five decades, Mustang has become so much more than just a car,” said Andrea Zuehlk, Ford digital marketing manager, in a press release. “The feeling of freedom and independence Mustang inspires has made it popular around the world. Making it available in Need for Speed Rivals helps us share the joy that comes from driving a Mustang to even more people.”