Infographic: Everything You Need to Know about the 2017 Cadillac XT5

There have been plenty of exciting new cars that have made their debut in 2016, such as the Acura NSX supercar, Cadillac CT6 flagship sedan, and Buick Cascada convertible, but with the market demanding more light duty trucks and crossover SUVs, the 2017 Cadillac XT5 crossover could end up being the most successful vehicle released in 2016. The new Cadillac XT5 is the replacement for outgoing SRX crossover and was built using General Motors’ new C1XX platform. The infographic below provides a glimpse of why the XT5 has already become the luxury automaker’s best seller. 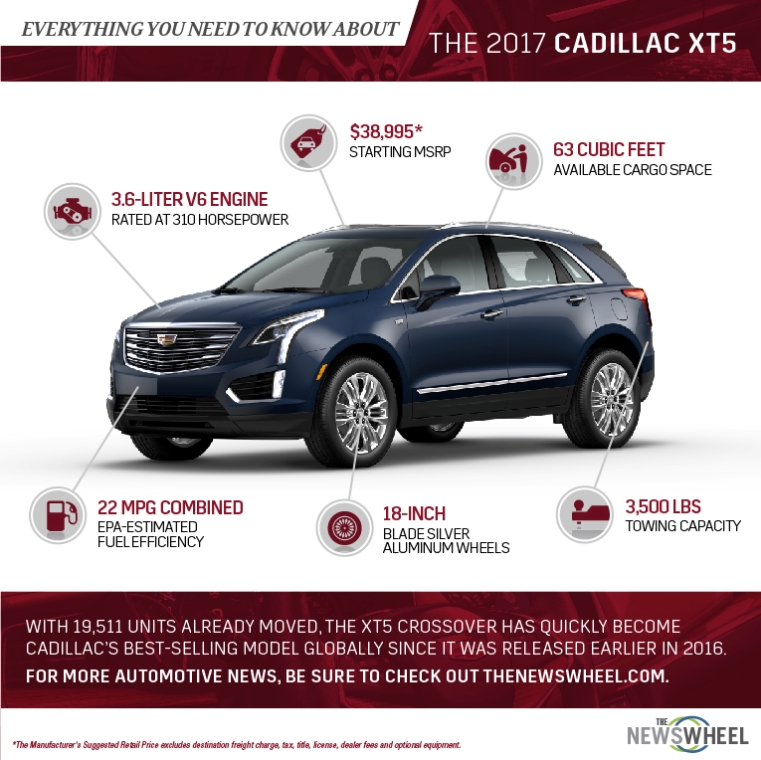 Can’t Get Enough Infographics?  Take a look at the full collection on The News Wheel

Thanks to its 310-horsepower V6 engine, the XT5 can tow up to 3,500 pounds when it’s equipped with the optional Trailering package, which includes both a hitch and wiring harness. In addition, the Cadillac XT5’s engine features automatic stop-start and active fuel management technologies, which can temporarily shut down multiple cylinders when they’re not needed to improve efficiency. This tech allows for EPA-estimated fuel efficiency of 22 MPG combined.

For consumers concerned about cargo space, there is 30 cubic feet of storage space behind the rear seats, but maximum cargo capacity grows to 63 cubic feet with the rear seats folded down. That’s more than enough room for a few briefcases, golf clubs, or groceries.

The exterior of the XT5 is highlighted by 18-Inch Blade Silver aluminum wheels that are made from lightweight durable cast aluminum. Moreover, these unique wheels come standard on the XT5 and add even more style to the crossover. Consumers can also upgrade to larger 20-inch wheels on higher-level trims.

To increase safety, the XT5 comes standard with LED daytime running lights. These lights make it easier for other drivers to spot the XT5 on the road, which increases overall safety. In addition, LED lights are more efficient and don’t produce as much heat as halogen lights.

Another unique feature of the new Cadillac XT5 is its power rear lift gate. All that’s required in order to open the rear of the XT5 is to perform a kicking motion underneath the back bumper, but you must have the keyless fob nearby. Moreover, the lift gate can also be programmed so that it only opens to a specified height, which allows it to avoid colliding with low ceilings, like in a garage.

The XT5 crossover has quickly become Cadillac’s best-selling model with nearly 20,000 units moved since it was released earlier in 2016. With four trim levels to choose from and an available all-wheel drive system; Cadillac made sure there’s a version of the XT5 for everyone.