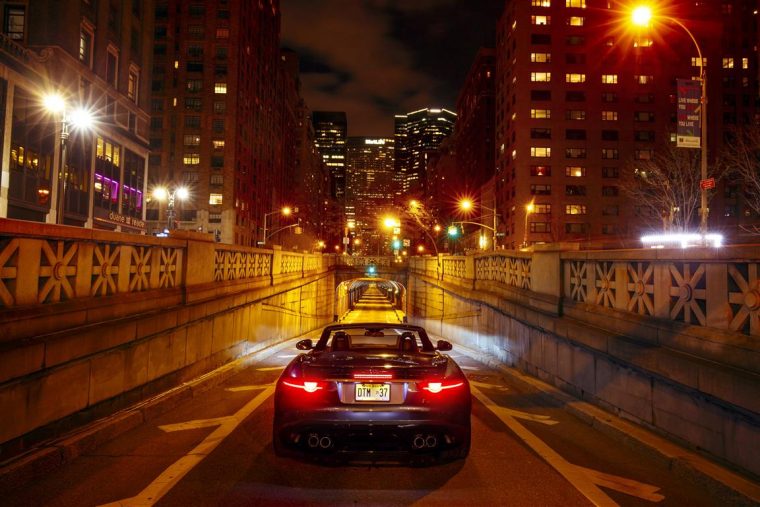 There are fast cars… and then there’s the new 2017 Jaguar F-Type SVR. As part of its attendance at the 2016 New York International Auto Show (NYIAS), the British automaker closed down the Big Apple’s Park Avenue Tunnel to show off the loud purr of the 200-mph sports car.

The Park Avenue Tunnel is 1,600 feet long, running for approximately seven city blocks. In other words, it was the perfect place for Jaguar to unleash the 2017 F-Type SVR, and the tunnel’s acoustics made it ideal for demonstrating the car’s distinctive roar, which comes from its unique Titanium and Inconel exhaust system. This is paired to a menacing 5.0-liter supercharged V8 engine that pumps out a whopping 575 horsepower and has a 0 to 60 time of just 3.5 seconds

To accompany the visceral sound of the F-Type SVR, Jaguar installed a series of lights along the tunnel which changed color from white to “Jaguar Red” as the sports car accelerated harder and faster. The result was a stunning event that left members of the automotive press with their mouths hanging open.

The F-Type SVR will go on sale in the US sometime this summer with a starting price of $125,950 for the coupe and $128,800 for the convertible. This certainly seems like a lot (equal to or more than a decent-sized family home here in the Midwest), but Jaguar is aiming to compete with the likes of Ferrari, Maserati, and Mercedes-AMG, so your average Midwestern soccer mom isn’t exactly the target audience here.

The rather loud event followed the 2017 F-Type SVR’s North American debut at the 2016 NYIAS last night, where the automaker also announced it would build nine XKSS supercars to the exact same specifications as those made in 1957, which were destroyed by a fire at Jaguar’s Browns Lane plant. These ultra-exclusive continuation models will be sold in excess of £1 million, making the F-Type SVR look like Jaguar’s answer to the Chevy Spark.