Lexus Anti-EV Ad: Folks Are Too Dumb to Download Apps 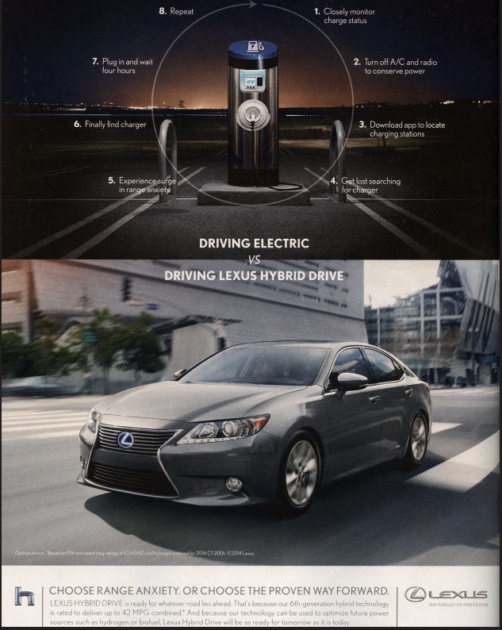 When it comes to electric vehicles, Lexus is what one might deem a “hater.” Back in May, Lexus was forced to apologize for and remove a serious of videos that utilized incorrect data to suggest that plug-in electric vehicles are inherently inferior to hybrids. It shouldn’t come as much of a surprise to learn that Toyota, which only offers the underselling (and soon-to-be-discontinued) RAV4 EV and Prius Plug-In in the United States, has made it clear that Lexus will not go electric anytime soon, stating that it believes the future of alternative fuel vehicles are hybrids and hydrogen fuel cell vehicles.

Despite its previous dust-up, Lexus seems to be back on attack, rolling out print ads in Wired and various other publications that suggest EV drivers are wasting precious time that could be better spent driving their Lexus CT 200h. Because, as you well know, it takes just a ridiculous amount of time to charge an electric vehicle and it has nothing to do with the fact that Lexus isn’t going EV anytime this century.

“The [print] ad was merely intended to paint a picture of life with a hybrid, which is basically no different from life with a traditional gas-powered vehicle, versus life with an EV, which can have challenges or at least uncertainties,” Lexus spokesman Brian Bolain told AutoblogGreen. “In other words, at its core, the ad’s message was that a consumer could participate in driving a vehicle with advanced technology today, without sacrifice or change in habit.”

Because if there’s anything that’s important in adopting new technology, it’s not changing your habits in the slightest (even when tweaking your habits could ultimately result in reducing emissions by a whole bunch and saving a lot of money). We all remember the riots that occurred when people were no longer forced to stand in once place during phone calls after the first cordless phones where released.

While there isn’t a full-scale nationwide EV charging network in place yet, it’s not unreasonable to think that the proximity to fast chargers would be a considerable factor in the purchase of an EV. Not only does this Lexus ad assume that EV shoppers haven’t considered these facts or even done the research necessary to make an informed opinion, but it also assumes that they’re unprepared altogether.

According to the cycle depicted in the ad, EV drivers waste time with activities such as watching their battery’s charge status, turning off A/C and radio to save power, and downloading an app to find charging stations. It should be stated on the record that no one anywhere ever has monitored the level of gasoline in their vehicle, nor have they ever turned off the A/C in order to conserve fuel. Also, driving an EV on less than a full charge over a long distance without a charge station finding app downloaded is like trying to make a cross-country trip without a GPS or map.

Lexus seems to think that car shoppers are like your 75-year-old grandparent wandering around a WalMart and trying to figure out which game they need to buy for “the kind of Nintendo my grandson has.” If you buy an EV without being anywhere near a well-organized charging network and not at least taking the time to run a couple of Google searches, then you may as well be Aunt Judy who bought you a copy of MindJack when you’d actually asked for Titanfall. 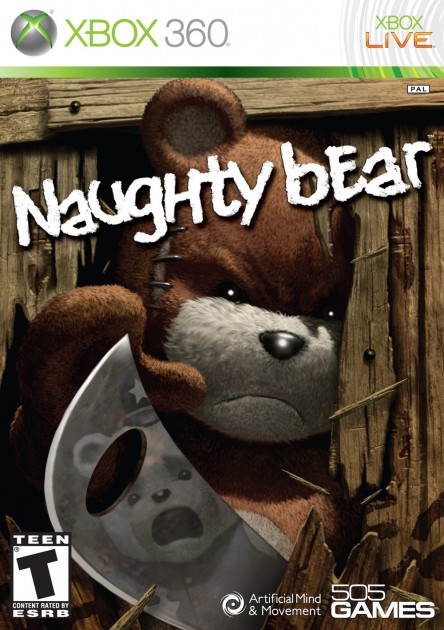 “Is this that game you wanted about the mushroom people, sweetie?”

Then there’s the matter of “[getting] lost searching for chargers.” Again, this is easily resolved if one has the tools necessary to ensure they don’t get stuck 100 miles away from the nearest charger. Did we mention that part of Lexus’ original anti-EV ad was the claim that there is adequate hydrogen refueling infrastructure in place in more than 20 states? Do we even need to tell you how bogus that particular claim is?

Then, of course, you’re forced to endure hours and hours of charging before you can drive again. This largely depends on the kind of charger you happen upon, but Direct Current Quick Chargers can restore 80 percent battery power in about half an hour.

We get what Lexus is trying to do here: talk up its product and promote its preferred technology as superior. It’s the automotive equivalent of VHS and Betmax, and it’ll likely be years before we determine a true prevailing technology. But, in the mean time, it would likely behoove Lexus to not print ads that make the assumption that new technology adopters are unable to do even a little bit of research before picking out a car.