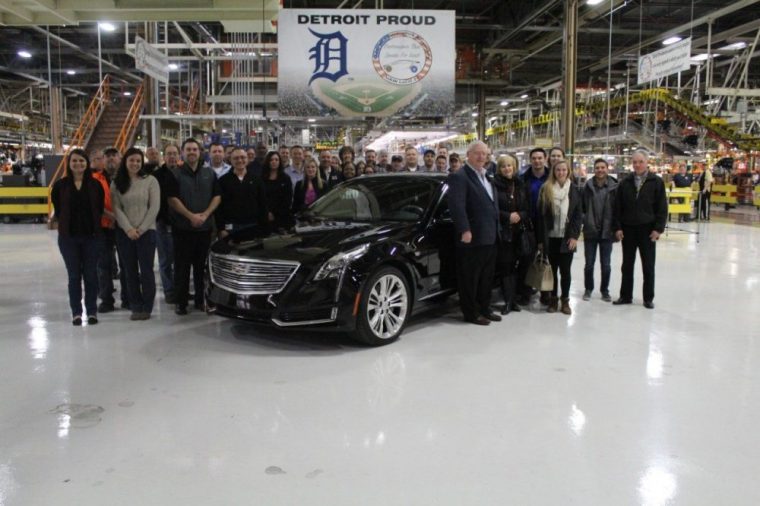 “It’s terrific,” Flynn said after seeing his sedan for the first time. “I told my oldest daughter she could have it, but I’m re-thinking that decision now after seeing it.”

Cadillac News: An April release date has been announced for the 2017 Cadillac XT5

Flynn and his family were given a full tour the Detroit-Hamtramck Assembly plant, also known as D-Ham, where the building of his prized sedan had just been completed only four days prior to his visit. The car dealer and his family met with members of the D-Ham staff, as well as the CT6 launch team during their tour. The designers of the CT6 sedan also gave the family an autographed sketch of the vehicle.

The precise CT6 trim level that Flynn received was not specified, but it did appear that his sedan featured the Stellar Black Metallic exterior color option. Even if he just received the base CT6 model, his Cadillac still came with leather upholstery, dual-zone climate control, and GM’s OnStar system with 4G LTE connection and Wi-Fi hotspot capability.

The $200,000 that Flynn bid for the Cadillac CT6 all went to the Barbara Ann Karmanos Cancer Institute. The GM Foundation donated an additional $500,000 to support cancer research at Karmanos back in 2015. Karmanos President and CEO, Gerold Bepler, expressed gratitude for both donations after last year’s successful auction.

“We are extremely grateful for our long-standing partnership with GM and the GM Foundation whose philanthropic contributions continue to support our mission to do all we can to end cancer,” Bepler is quoted as saying. “GM is constantly perfecting and advancing its vehicle engineering, as shown in the exciting Cadillac CT6. So too is our team of expert oncologists and researchers relentless in their commitment to advance discoveries that can lead to new treatments for those battling cancer.”

Want More Info About The CT6? Check out this overview of Cadillac’s new flagship sedan