Meet the New Electric Kid on the Block: Nikola

It’s a pretty safe thing to say that Nikola Tesla was awesome. He invented AC electricity (which some might recognize as what powers basically everything), induction motors, the Tesla coil, and inspired one seriously sweet electric car company.

Wait, sorry, did I say one electric car company? Better make that two.

Enter the Nikola Motor Company, an electric-vehicle company recently revealed after a period of keeping a low profile. Unlike Tesla’s approach, though, Nikola hasn’t produced an electric passenger car—it made a semi truck. 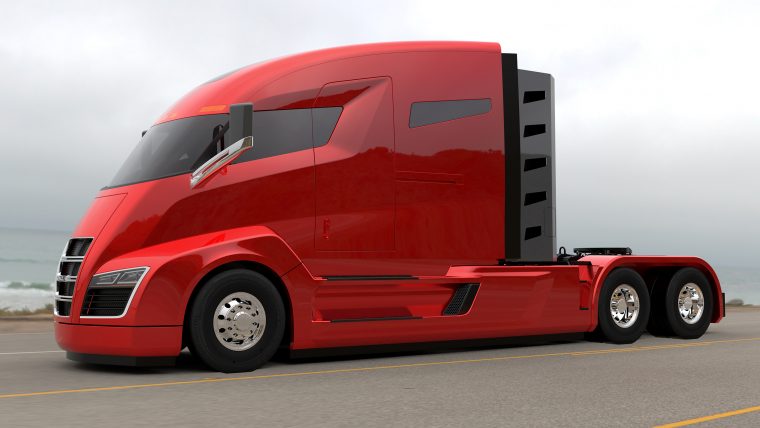 The semi is called the Nikola One and is sort of a hybrid vehicle. It draws power for all of its systems from a huge battery—a monster 320kWh one, according to Nikola’s website—which can take the semi from 100 to 200 miles on its own. When the battery runs down on energy, a range-extending turbine kicks on, which comes standard powered by natural gas from a 150-gallon tank (although it also comes in regular and diesel gas versions), and if all else fails, it has a charging port.

Now, that sounds cool, but the crazy parts come in when you start to talk about the One’s stats. It uses a full six electric motors, together producing 2,000 hp and 3,700 lb-ft of torque with all-wheel 6×6 drive. That power means the One could fly up hills at a top speed of 65 mph on a 6% grade, and then use regenerative braking to recharge the battery on the descent. Plus, due to the range extender, the company estimates that you could get up to 1,200 miles on a single fill.

Not that that will matter to the first 5,000 owners, though—Nikola has promised to give them 100,000 gallons of free liquefied natural gas, to be used at Nikola’s stations or to be reimbursed if the driver needs to stop at someone else’s CNG station.

Unfortunately, the Nikola One is only a rendering for now, but the company plans to reveal the first working prototypes later this year.