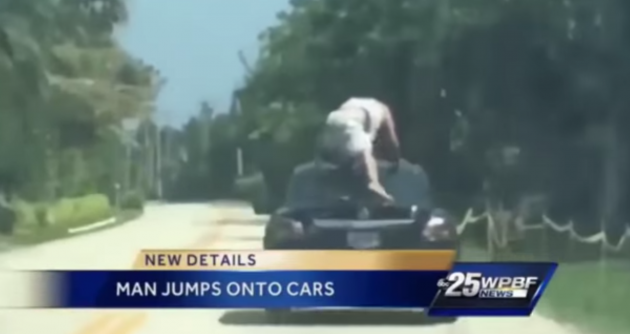 The wild creature known as Floridaman loves doing things on the roofs of cars—a fact that we’ve well documented. But this particular specimen is daring enough to leap onto the roofs of moving automobiles, which takes a considerably amount of bravery. Chalk it up to liquid courage, perhaps? Well, something like that…

Florida man Jonathan Restrepo, 25 years young, was reportedly high on crystal meth when he jumped out of his girlfriend’s car in the middle of traffic and began searching for a new ride. Restrepo jumped on top of multiple cars—and inside a convertible going 20 mph!—under the (mistaken) impression that he needed protection from forces that were conspiring to kill him.

Fortunately, a motorist driving down A1A in Palm Beach county caught most of the incident on his cell phone camera:

“He was running around like a monkey with his tongue out, waving his arms in the air, jumping on top of cars,” the man who recorded the footage told WPBF 25 News.

Once law enforcement officers arrived, Restrepo quickly jumped off of the car he was riding atop and surrendered, before shocking police with the revelation that he was, in fact, on drugs.

No one was hurt, but Restrepo did do more than $1,000 in damage to two different cars.

At one point, he jumped on top of a Nissan Altima, and the driver kept going, later saying that she would have driven him all the way to the police station, because there was no way she was stopping with a man on top of her car.

Related News: Seattle Police to Use Nissan LEAF as a Cop Car