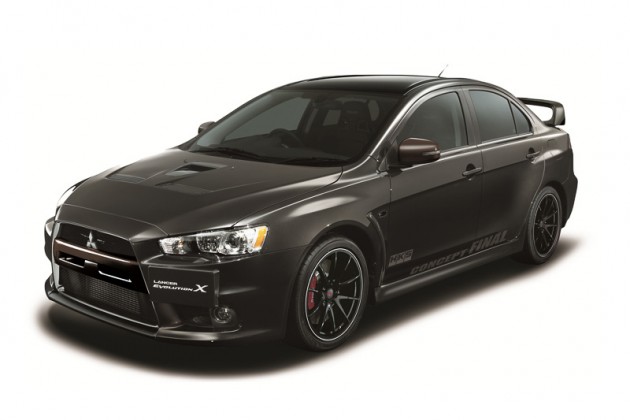 During the 2014 Los Angeles Auto Show, Mitsubishi Motors North America Executive VP Don Swearingen stated that there were no plans for a Lancer EVO XI any time soon, but did announce that the automaker would be working on a “Final Edition” of the Evolution for release some time later this summer.

While we can’t say with any certainty what plans Mitsubishi has in store for Detroit two short weeks from now, we do know what it will be doing at the Tokyo Auto Salon between January 9th and 11th: unveiling the Lancer Evolution X Final Concept, which will likely be the direct analog for the US-bound model.

As has been expected for some time, the Lancer Evolution X Final Concept will build upon the GSR variant of the EVO, adding matte black finish around the body, glossy finish on the roof and rear spoiler, and chrome finish on the grille.

The biggest boost comes in the engine bay with an HKS turbocharger, boosting output to 473 horsepower with the assistance of a new intake, exhaust system, cooling system, and ECU. In comparison, the output of the 2015 Lancer EVO is 291 horsepower.

In a word: yikes.

HKS will also provide a height-adjustable sport suspension, and RAYS adds forged aluminum wheels that will be wrapped in 19-inch Yokohama Advan Neovas.

More News from Mitsubishi: Mitsubishi Confirms a Mirage Sedan for US Market