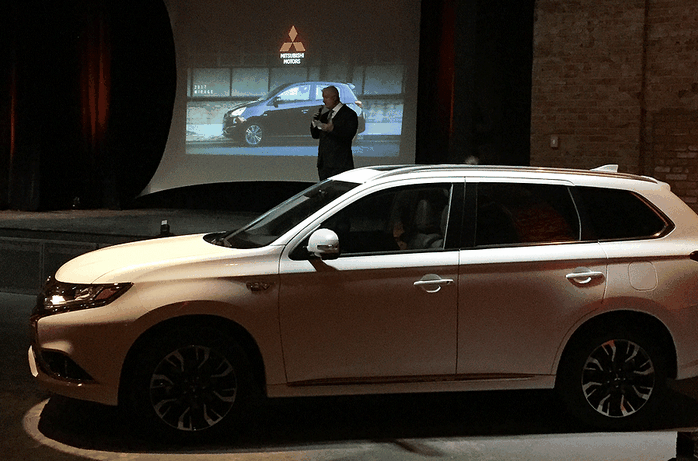 Here’s a sneak peek of the Mitsubishi Outlander PHEV

A long time ago in a galaxy far, far away, Mitsubishi told us that we would be seeing the plug-in hybrid Outlander—known as the Outlander PHEV—sometime soon. Then we got word there was a delay. And another.

But now, the Japanese carmaker has actually given the American automotive industry a glimpse of the elusive Outlander PHEV, and we have to say—it’s pretty awesome.

Because Mitsubishi is skipping the North American International Auto Show (NAIAS) this year, the Japanese carmaker decided to give the press a glimpse of its newest vehicle at a special event Thursday evening. During this event, Ken Konieczka, vice president of Mitsubishi’s sale operations, talked us through what to expect, but there was really not much information he could give out.

According to the Mitsubishi executives present at the event, they couldn’t provide details on the Outlander PHEV, because the details were still being determined. We do know, though, that in addition to the Outlander PHEV, there will be a sedan version of the Mirage, called the 2017 Mirage G4, debuting at the Toronto auto show in February.

The Outlander PHEV will make its official debut at the New York International Auto Show this spring, going on sale—hopefully—in August. It will join the 2016 Mitsubishi Outlander, which was recently refreshed with over 100 improvements.