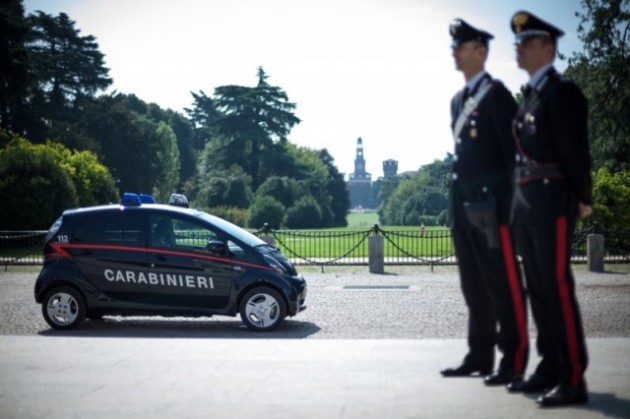 Two officers of the Carabinieri and their shiny new i-MiEV

When one thinks of military police vehicles, one might immediately think of large, rugged-looking vehicles that have the power in and of themselves to intimidate. One might not immediately think of, say, a petite electric car with a cute name, but that didn’t seem to dissuade the Carabinieri much. Italy’s national military police will take delivery of 23 i-MiEV electric cars from Mitsubishi’s Italitan distribution agency, M.M. Automobili Italia Spa (MMAI).

According to Mitsubishi UK, the i-MiEV already serves as the vehicle for the police in Japan’s Kanagawa Prefecture, as well as in Hong Kong, Spain, and the UK.

The i-MiEV’s quiet ride and EPA-rated range of 62 MPGe make it an ideal green choice for police in an urban center. With sales of the i-MiEV sputtering in the United States, it’s a wonder that the automaker isn’t making more of a push for its little EV to become the city service vehicle of choice for police around the nation.