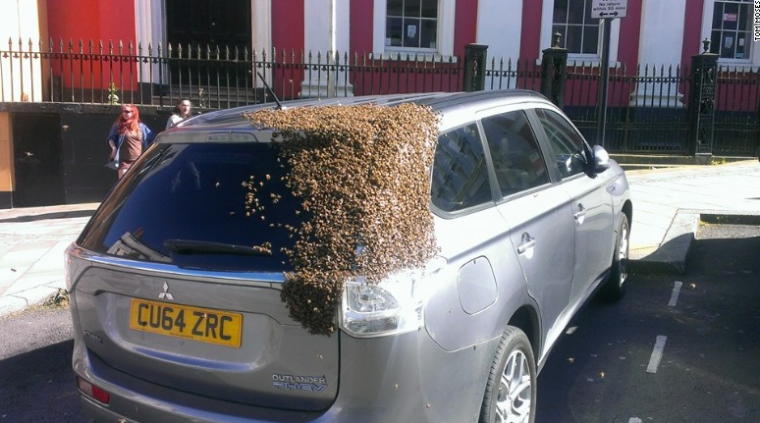 The Mitsubishi Outlander plug-in hybrid is a pretty attractive vehicle—and it appears that a whole hive of bees agrees.

In Haverfordwest, West Wales, a ferocious bee army decided to attempt to make one woman’s Mitsubishi Outlander PHEV their new home. Okay, maybe they were actually just trying to rescue their queen bee, which was presumably trapped in the hybrid SUV, but the results were still the same—a massive swarm of bees following around one unsuspecting Welsh woman.

Supposedly, Carol Howarth, a 68-year-old grandmother, had been to a nature reserve earlier in the day, not realized she had picked up the queen bee while she was there. During her shopping exhibition, the swarm steadily got worse and was noticed by a local ranger named Tom Moses.

When Moses noticed the unexpected swarm, he rang up the local Pembrokeshire Beekeepers Association, who came to the rescue and helped guide the bees into a box.

It shouldn’t come as a surprise that some people were stung in the process of the rescue. And the adventure didn’t stop there.

Despite removing the swarm of bees the day before, the bees seemed to take a liking to the Outlander PHEV SUV. It appears the insects weren’t finished attempting to rescue their queen and the swarm came back the next morning.

If only all beings showed that much loyalty.

The beekeepers were called once again and, by 6pm, her Outlander was free from the bees.

There’s no word on what happened to the queen, though.