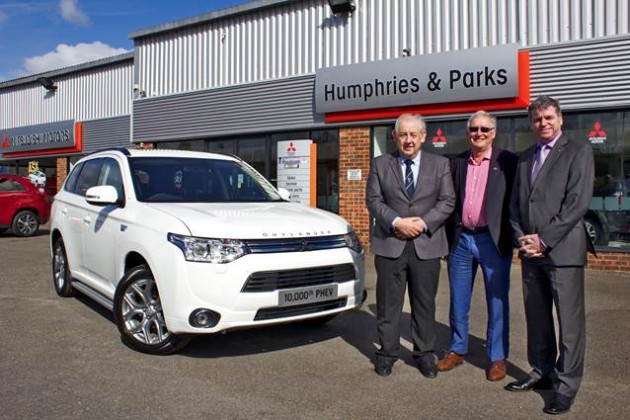 Early this month, Mitsubishi announced a pretty monumental milestone for its UK branch: it sold 10,000 Outlander PHEV units in the UK in the model’s first year there. Since the model entered the market in the UK in April of last year, it has quickly become the most popular plug-in hybrid in the country, surpassing even the Nissan LEAF, which has been a favorite in the UK for several years.

Paul Aspin was the lucky customer who purchased the 10,000th model. Aspin, who is a retired Director of Marketing for IBM Europe, purchased the car at a dealership in West Malling, Kent. He told Mitubishi, “It’s a fantastic vehicle and I’m happy to be the 10,000th customer. The Outlander PHEV ticks all the boxes for me. It’s great to drive, it’s comfortable, economical and it’s good for the environment. It’s got lots of clever technology but you don’t need to be a tech expert to use it.”

The Outlander PHEV is very environmentally friendly. In fact, drivers can take it 32.5 miles on pure electric power alone. In total, it merits 148 miles per gallon. Because it boasts low emissions of only 44g of CO2 per kilometer, there is no vehicle tax, plus customers don’t have to pay London’s congestion charge. As if that’s not enough, customers also receive the £5,000 Plug-In Car Grant to boot.

Buying a Mitsubishi Outlander PHEV in the UK seems to make a fair bit of sense. No wonder 10,000 have driven off the lot in just a year’s time.