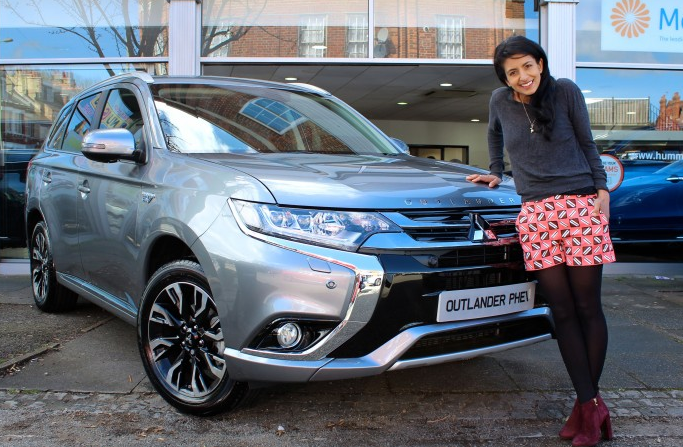 Konnie Huq, pictured here with her new Outlander PHEV, is the newest Brand Ambassador for Mitsubishi in the United Kingdom

Mitsubishi is working on increasing its visibility in the United Kingdom. What better way to do that than to recruit a TV presenter as the newest Brand Ambassador?

The Japanese carmaker recently announced that Konnie Huq, a TV presenter known for her role on the Blue Peter children’s television show, is the brand’s latest Brand Ambassador—specifically for the all-new Mitsubishi Outlander PHEV.

Want Something Sportier? Check out the newest Mitsubishi Outlander Sport

“I’m delighted to be a Brand Ambassador for Mitsubishi because I think the Outlander PHEV is a fantastic vehicle,” said Huq. “There’s a preconceived notion that to be environmentally friendly and have an electric car you end up in small, weedy cars that you can only use as run-arounds, but this car flies in the face of that.”

As a mother of two, Konnie saw the benefits of driving the Outlander PHEV. She stated, “It ticks all the boxes for me—totally family friendly, you can get a double buggy in the boot and there’s loads of space left for shopping, luggage, scooters, whatever!”

Mitsubishi’s Electric Future: See what new plug-in vehicles Mitsubishi is introducing to the US

Currently, the Outlander PHEV is making waves in the United Kingdom. It is considered the nation’s top choice of plug-in vehicles. This hybrid vehicle can travel 32 miles in electric mode, but can reach a range of over 500 miles when combined with its gasoline engine. These excellent green car credentials mean owners of the Mitsubishi Outlander PHEV don’t have to pay a Congestion Charge (£11.50) in central London. They also qualify for the government’s Plug-In Car Grant.

We’re still waiting for the Mitsubishi Outlander PHEV to make its way to American dealerships, but based on the fact that it debuted earlier this year at the 2016 New York International Auto Show, it’s likely we will see it sooner, rather than later. Fingers crossed.