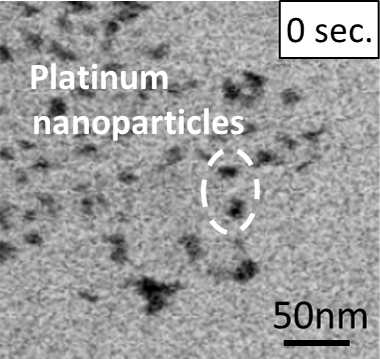 Toyota is looking for ways to make hydrogen fuel-cell technology more prevalent as it prepares to roll out its ground-breaking Mirai later this year. A recent discovery in the real-time observation of fuel cell catalyst degradation could result in more efficient fuel cell stacks, which could ultimately help drive down the cost of fuel-cell vehicles and infrastructure.

Toyota Motor Corporation and Japan Fine Ceramics Center (JFCC) announced Monday that they have developed a new technique that allows researchers to observe platinum particles during chemical reactions in fuel cells. Platinum is necessary for the generation of electricity in the process, and so being able to observe these particles can lead to better refinement and more efficiency in the electricity-generation reaction.

Reduced platinum particle reactivity results in the “coarsening” of said particles, which is ostensibly an efficiency-leaching increase in size and loss of service area.

We will likely know more about how Toyota plans to apply its discovery to the development of future fuel cell vehicles as research continues.