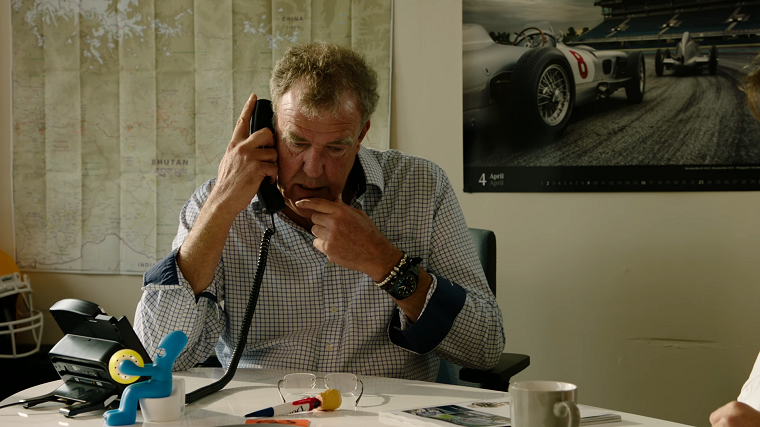 The second season of The Grand Tour is cutting out a lot of things from the first season: the traveling tent is gone, “The American” won’t be returning, and now we have just learned that the celebrities will also finally stop being killed.

In the very first episode of the first season, Jeremy Clarkson, Richard Hammond, and James May had introduced a new “Celebrity Brain Crash” segment, which featured an intentionally terrible sting and an equally but unintentionally terrible follow-up: each time a guest was introduced, he or she would be shown traveling to the tent and then being killed in some absurd way. “Does that mean they’re not coming on, then?” May would then quip.

And these weren’t just actors pretending to be celebrities. The Amazon Prime show actually invited celebrities such as actors Jeremy Renner and Charlize Theron, Formula One drivers Kimi Räikkönen and Daniel Ricciardo, AC/DC frontman Brian Johnson, and various other big names, only to kill them off without so much as an interview.

New Features: The 2018 Jeep Compass has got lots

The segment quickly became tiresome—arguably as early as in the first episode, where TGT killed three celebrities in sequence as though to really drive the point home that this is what it would be doing throughout the season. It felt not just like a waste of time but also a wasted opportunity: fans would have been much happier seeing an interview with some of their favorite celebrities.

Supposedly, TGT had chosen to take this route because the BBC had made threats of legal action should the competing show also feature celebrities driving on a race track and having a leaderboard. It seems, however, that for the second season the producers either decided they didn’t care or have have found a loophole—because the celebrities are definitely coming back, and this time they won’t be getting killed left and right.

Finance FAQ: Answers to the most common questions about buying a car