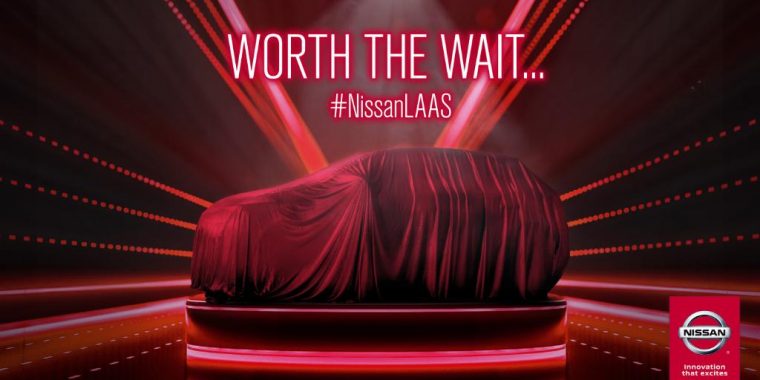 The LA Auto Show’s press days, called AutoMobility LA, are finally here, and brands from around the world are getting ready to make some big announcements. We weren’t quite sure what to expect from Nissan this year, but it seems as if the Japanese automaker brought a new SUV to unveil at the show.

In an 11 am tweet this morning, Nissan sent out an image of the new vehicle under wraps with the tagline “Worth The Wait” as well as Nissan’s hashtag for the LA Auto Show, #NissanLAAS. It is also important to point out that Nissan is hosting press conferences on both Wednesday and Thursday, with sources saying the event tomorrow will focus on the new production vehicle and the slot on Thursday will be for new Star Wars vehicles (which we hope means a new special edition).

Watch live Wednesday 11/29 at 11:45am PST to see the big reveal at the LA Auto Show. #NissanLAAS pic.twitter.com/e9AFNtLLjM

Of course, once the picture went live, media outlets began speculating what Nissan is concealing under the sheet. The Torque Report thinks that it might be a replacement for the Nissan Juke, which seems to be on its way out, or an American version of Brazil’s Nissan Kicks to take on funky crossovers like the Honda HR-V. Motor Trend agrees that the new crossover will probably be on the smaller side, but the team is conflicted about if it will replace the Nissan Juke or simply be in the same class as it. When the Nissan Rogue Sport rolled out last year, it seemed like there was no room for it in the lineup but the vehicle has thrived between the Juke and the Rogue.

Considering how important SUVs have become for Nissan and other automakers, it’s not surprising that they are trying to capitalize on the segment with a new model. But considering that Nissan already has six crossovers and SUVs (compared to five non-sports cars and three trucks), it might be time for Nissan to choose a vehicle to drop from production to make room for this new vehicle. As much as we love the delightfully weird Nissan Juke, it might be time to send it to the parking lot in the sky.