Nissan Put Tracks On Yet Another Vehicle 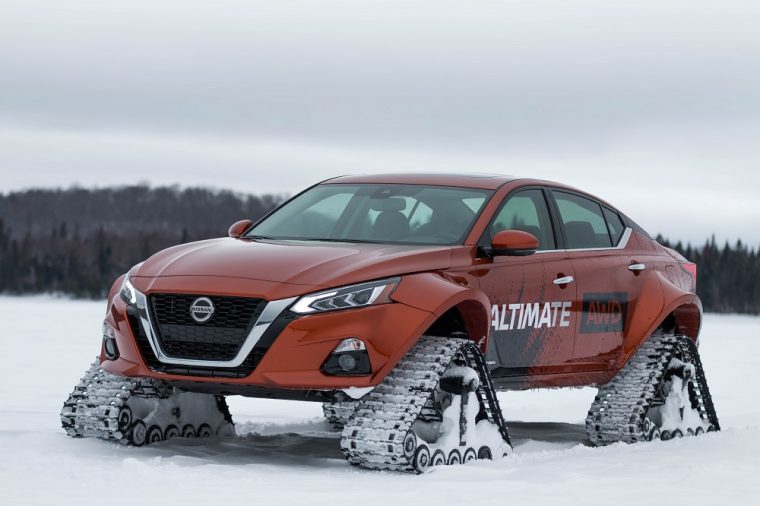 I have to give it to Nissan: it knows how to make sharp and futuristic concept cars. Its project cars aren’t too bad (I still want one of the Star Wars vehicles to fly through snow with), but we’re definitely seeing a theme emerging. If it’s winter and a cold part of North America is hosting an auto show, Nissan will put tank-style tracks on one of its cars.*

Heading South for the Winter? Check out these fun things to do in Mississippi

This time around, Nissan swapped the wheels off of the all-new Nissan Altima to promote its new AWD capability. Of course, it couldn’t just leave it there, so the new car was dubbed the “Altima-te AWD” project vehicle. The News Wheel’s office is full of punsters, so I’m used to humor like this. On the scale of light chuckle to yelled expletive, the name of this amped-up car falls squarely in the middle with an eye roll. Not bad, Nissan!

Punny name aside, the Altima-te AWD is a pretty powerful sedan. The team at Canada’s Motorsports in Action, who are also responsible for the Rogue Warrior, built out this Altima for the Montreal International Auto Show in Canada. While the Rogue with tracks didn’t require much modification beyond the wheels, the Altima needed a bit more help to reach its ultimate status because of its smaller footprint. For example, this Altima got some very exaggerated fenders to accommodate the track system. It also needed some upgrades to the chassis to raise it higher up from the ground.

Speaking of the Rogue: See how the Rogue takes down its competitor from Ford

*Sometimes it will also do it in warmer weather. See the Nissan Rogue Trail Warrior Project.