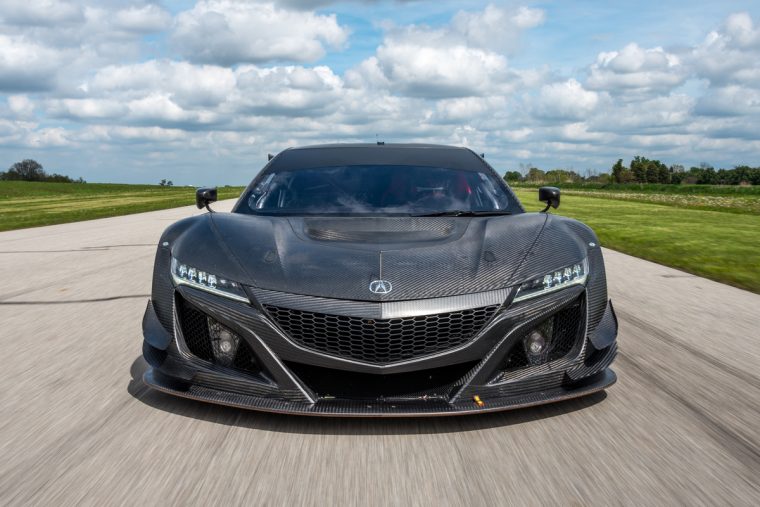 Today Acura, Honda Performance Development, and Honda R&D announced that the race-winning Acura NSX GT3 racecar will be offered for sale around the world in advance of the 2018 racing season. The exposed carbon, race-ready NSX GT3 will carry a starting price of €465,000.

The NSX GT3 is eligible to race in more than two dozen FIA-sanctioned racing series around the world, including the Pirelli World Challenge and WeatherTech SportsCar Championship series in North America, the Blancpain GT Series and 24 Hours Nurburgring in Europe, the Blancpain GT Series Asia and GT Asia Series, the Super GT GT300 class in Japan, the Australian GT Championship, and the Intercontinental GT Challenge.

There are additional options and complete customer support, including parts and service, training, and engineering services available.  HPD is now taking North American orders for the NSX GT3 at AcuraClientRacing.com. JAS Motorsport will deliver NSX GT3 orders to Europe, the Middle East, and Asia (excluding Japan, for which MUGEN is responsible).

The racecar features a production-based 3.5-liter, twin-turbocharged V6 racing engine that is built alongside its production-vehicle counterpart at the Anna Engine Plant in Anna, and mated to a six-speed, sequential-shift racing gearbox.

“We are extremely pleased with the progress and success of the NSX GT3 in our inaugural season,” said HPD President Art St. Cyr. “Winning at Detroit and Watkins Glen, two very different circuits, in this highly competitive class illustrates the breadth of capabilities of the NSX GT3. We look forward to seeing the car in Victory Circle at tracks around the world in 2018 and beyond.”

“We’ve intended to compete at the highest level since the NSX was just a sketch on a pad,” said Jon Ikeda, Acura Vice President and General Manager. “To see the NSX GT3 winning races and now available for racers and track enthusiasts to enjoy around the world is a major milestone for the second generation NSX, the Acura brand and the global development team that made it possible.”