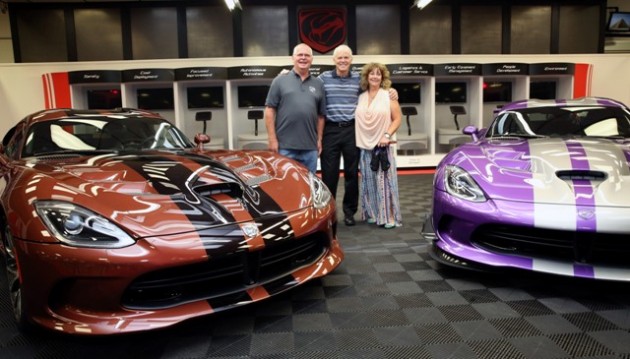 Sometimes, one Dodge Viper just isn’t enough. At least, not if you’re Wayne and D’Ann Rauh of Texas. Known throughout the Dodge inner circles as the owners of the “Vipers’ Nest,” these two don’t just have two or three Dodge Vipers—they have 77. And they just added two more to expand their collection even more.

Vipers number 78 and 79 were delivered last Friday after the couple, who are now retired from their oil transportation business, used Dodge’s 1-of-1 personalization program for the Viper. This unique program allows you to customize almost every single aspect of the American supercar, allowing for over 50 million unique build configurations to choose from.

Watch the reveal of the Rauh’s 78th and 79th Vipers:

The first addition to the Rauh’s collection was a Viper GTC finished in brown, which featured a contrasting black stripe package; the second was slight more feminine in a funky purple color that featured silver stripes. Both cars were presented to the couple at a special event at the Viper’s Conner Avenue Assembly Plant in Detroit.

Other Vipers in Wayne and D’Ann’s collection include a Spiderman-themed car, one inspired by Darth Vader, and a third that has an image of Medusa across the hood. The couple didn’t begin collecting the cars until 2006.

We’re not sure when the Rauh’s find the time to drive the entire collection, but we have to say—we’re impressed with how much horsepower they have in their garage.