Backseat drivers are one of the evils of the driving experience. That is especially true when they’re dropping string cheese between the seats and messing with all the systems.

That brings us to an NBC/Nissan joint video featuring The Voice’s Adam Levine and Blake Shelton driving in the new Nissan Maxima to show Levine’s and Shelton’s commute to work (and some of the Maxima’s features).

This video strikes every hallmark of a buddy cop movie (minus the cops). There’s the clean-shaven, hip guy from the city, with his spotless, brand-new car filled with all sorts of gadgets like a Bluetooth music player and built-in GPS, and tattoos. He is the kind of guy that says, “If you manipulate my presets…”

Then there’s the scruffy-bearded country boy with the southern accent, who comes in and messes with all the electronics (while somehow inexplicably figuring out Adam Levine’s phone password on the first try). He’s the kind of guy who brings along his soup and breaks out the string cheese mid-commute. 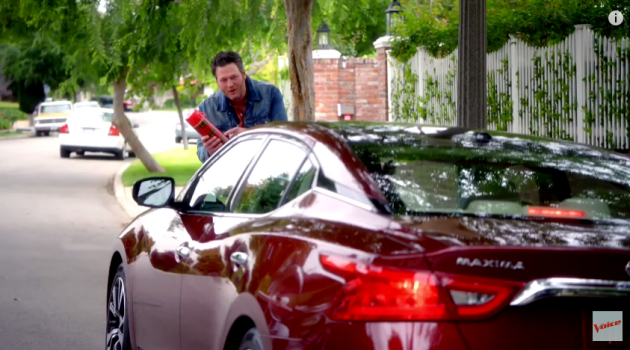 Pictured here, with his soup

Then again, he did share the string cheese (though, sadly, no word on the soup).