What is this magical nitrous that causes one’s car to become as lightning? Dost the Fast & Furious films speak truth?
Photo: Universal Pictures

If you’ve seen any of the Fast and Furious movies, you’ve no doubt seen the following happen on screen: a driver presses a button on the control board and a mysterious liquid is injected into the vehicle, resulting in the vehicle blasting ahead at suddenly lightning-fast speeds.

Is this the magic of Hollywood, or is there truth behind this street-racing technology?

Car Terminology Explained: Learn the definitions of other vehicle terms 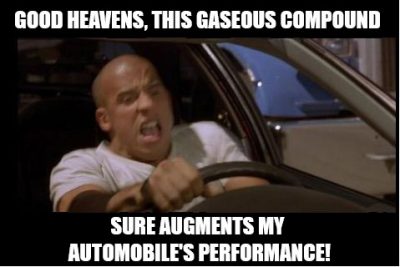 In the Fast and Furious movies, we’re introduced to a product called NOS in the very first installment. While it may seem like some magical deus ex machina that allows cars to boost fast enough to just edge out the competition, it’s a real-life brand of nitrous oxide (N2O). This gaseous compound is non-flammable and used for anesthetic purposes; you may know it by its informal name, laughing gas.

Nitrous oxide can be heated and used as an oxidizer propellant, making it useful for rockets and mechanical engines. This combination of two nitrogen and one oxygen molecules is stored in a liquid form in a bottle/can. When nitrous is injected into an engine, it results in an increase in the fuel being added, too. Because of the heat in the engine, the nitrogen and oxygen molecules split; the sudden increase in oxygen boosts the fuel’s combustion and thus makes the engine more powerful.

Check it out in action in the informative video below.

Nitrous is an easy way to get a vehicle’s engine to perform harder and faster without having to modify it. Of course, that doesn’t mean we recommend hooking up a can to your SUV to shorten your commute to work.

Give Your Wallet a Boost: Easy tips to save money this year