Who is the Woman Singing in the Acura Car Commercial? 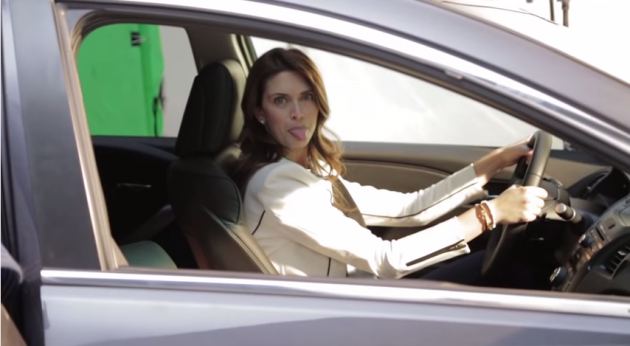 By now, you’ve probably seen the ad for the new 2015 Acura RDX  in which a woman raps along to the 1980 Blondie song “Rapture” (notable for being the first #1 hit single in the US to feature rap), and if you haven’t, take a look:

So, who is the woman who won’t stop spitting hot fire, even when interrupted by a conference call with her employees? Well, the answer might surprise you. Usually when we try to figure out who the star of a car commercial is (be it Toyota Jan or the cast of that Subaru tree-hugger ad), it invariably turns out that the person in question is, not surprisingly, an actor.

That’s why we were a little shocked to discover that the woman singing in the Acura car commercial isn’t a professional actor at all. Well, she is now, but she was “discovered” in a somewhat unusual way.

Her name is Chelsea Ranger, and she’s actually a mild-mannered dental hygienist from Toronto who went viral when her husband, Paulo Salomao, surreptitiously filmed her rapping to Salt-N-Pepa’s “None of Your Business” while riding in the car one day:

Paulo uploaded the video to YouTube in November 2014 with the title “The cutest gangsta I know. My wife.” In the video’s description, he said he enjoyed watching his wife “be herself” in moments like this, and then encouraged the rest of the world to be inspired by her heroic example, pleading, “don’t be shy people, say you love your loved ones, treasure the little moments and don’t worry if people are judging you!”

Apparently, that struck a chord with a lot of folks, because the video ended up garnering over 16 million views. It also landed a visibly emotional Chelsea on daytime television, where she performed a tearful duet of “Shoop” with Ellen Degeneres (don’t worry, they were tears of joy). (Video has since been removed.)

According to The Toronto Star, Acura’s ad agency reached out to Chelsea when the video had about three million views. But they wanted another “audition tape,” so she had to record herself sitting in her car and singing alone, which she understandably recalls as being a “very weird” experience. But it worked!

Then, because it was going to take too long to get a US work permit, Acura ended up filming the ad in Toronto. Chelsea was initially nervous, but once her husband and the commercial’s director started dancing along in front of the car, she found she could sing comfortably.

“Her knack for memorizing and belting out a tune was exactly what Acura was casting for at the time,” said Ed Beadle, senior manager of marketing at Acura. (Wait, seriously, the ability to sing a song from memory is all it takes to star in your own Acura commercial?) “Her fun-loving and relatable spirit fit the bill.”