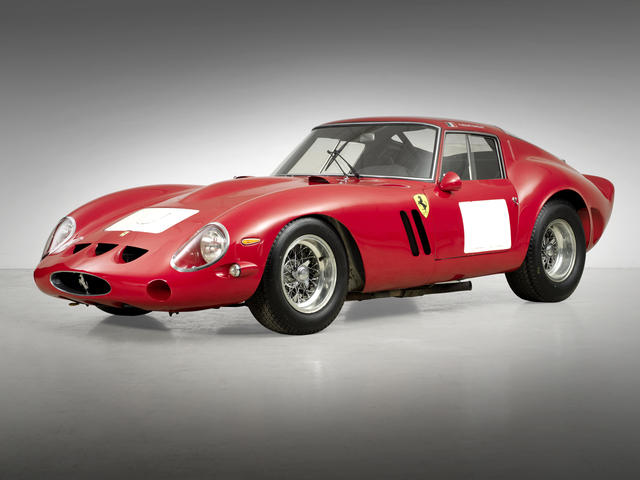 My usual invitation to this weekend’s Pebble Beach Concours d’Elegance was somehow lost in the mail, but Autoblog is reporting that I missed out on a chance to bid for a 1962 Ferrari 250 GTO. This rare classic car (Ferrari only ever built 39 of these racers) was put on the block by Bonham’s with no reserve for its auction, which means that it could have theoretically sold for just one dollar – and if string theorists are correct, then there is a parallel universe in which it did sell for just one dollar. Unfortunately for you and me, we were born into a universe where this Ferrari sold for a jaw-dropping $38.115 million, making it the most expensive car ever sold at auction.*

That record was previously held by Bonham’s sale last year of a Mercedes W196R, which went for a paltry $29.65 million, which is practically walkin’-around money.

Believe it or not, the auction price may have been a bargain, as another 250 GTO reportedly sold privately last year for $52 million.

Bonham’s also auctioned off a 1962 250 GT Short-Wheelbase Speciale Aerodinamica for $6.875 million, a 1953 250 Mille Miglia Berlinetta driven by racer Phil Hill for $7.26 million, and a 1978 312 T3 Formula One car for $2.31 million. Considering the other numbers being thrown around, the guy who only bought a $2 million dollar car seems like the kind of person who goes to a gourmet restaurant and only eats the complimentary bread and a small salad.

(*The most expensive car ever sold at auction in this universe. No doubt there is some bizarre dimension in the multiverse where people wear shoes on their hands and routinely bid in excess of $1 billion for highly collectible Pontiac Azteks)